One century ago this week, the April 27, 1918 edition of “Exhibitors Herald” reported that Fox’s release of CLEOPATRA, starring Theda Bara, would not be censored in Chicago after all: 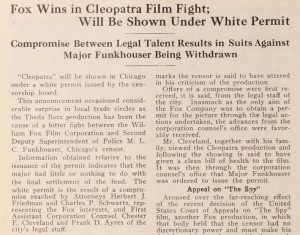 This was the culmination of what had been largely a political struggle involving the city’s head censor, Major Metellus Lucullus Cicero Funkhouser, and his political rivals. But what makes the article interesting from a larger perspective is that no significance at all is attached to the fact that a Chicago movie censorship board existed at all. From a modern perspective, one would naturally be inclined to ask whether routine censorship of motion pictures would not violate the First Amendment.

The answer is that in 1918 it absolutely would not. That question had been unequivocally settled in 1915 with a Supreme Court ruling in the case of Mutual Film Corporation v. Industrial Commission of Ohio, as reported in the February 27, 1915 edition of “Variety”: 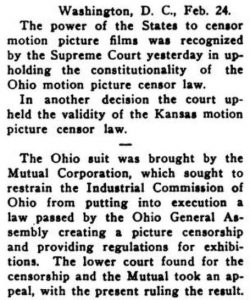 The court had rejected out of hand any arguments asserting that motion pictures should be regarded as organs of public opinion and therefore entitled to First Amendment protection. Writing for the court, Justice McKenna asserted that “…the exhibition of moving pictures is a business, pure and simple, originated and conducted for profit…” and “…not to be regarded…as part of the press of the country.” The court was untroubled by the fact that newspapers and books, which were incontestably protected, are also “originated and conducted for profit.” In using the phrase “pure and simple,” McKenna was apparently saying that movies were made for profit and nothing more. In the court’s view, it would be like asking for First Amendment protection for a circus sideshow.

Once it was established as the law of the land that movies enjoyed no constitutional protection from censorship, it was up to film producers to appease the various censorship boards as best they could. They could mount an appeal, and now and then, as in the CLEOPATRA case, they could win a reprieve, but they could cite no higher authority in pressing their case.

Municipal and state censorship boards were nettlesome enough, but in the early 1920s a series of unsavory Hollywood scandals threatened to sink the movie industry’s reputation to a new low, raising the specter of federal censorship. The industry, seeing the need to act affirmatively, established a trade organization called the Motion Picture Producers and Distributors of America and assigned it the task of rehabilitating the industry’s public image. Realizing that they would not be able to get away with appointing an industry insider to head the organization, as it would be seen as the fox guarding the hen house, they hired former U.S. Postmaster Will Hays (1879 – 1954) to fill that post. Hays had no prior ties to the movie industry, and his reputation in political circles was unsullied, even by the notorious Teapot Dome scandal that had rocked the Harding administration that he had served. The industry brought him on board with high hopes that he would prove to be the white knight who would rescue the imperiled image of their business, as this cartoon from the time illustrates: 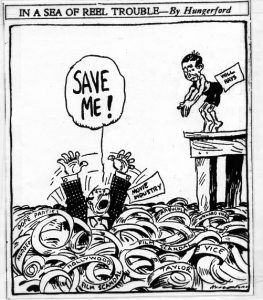 The hiring of Hays was a move that seemed patterned after the recent recruitment of Judge Kenesaw Mountain Landis as Commissioner of Baseball in the wake of the 1919 “Black Sox” scandal — bring in a respected figure with no prior connections to the tainted organization so that the public would believe in his ability to clean up the swamp. Hays assumed his new post in March of 1922, as “Motion Picture News” reported on March 18 of that year: 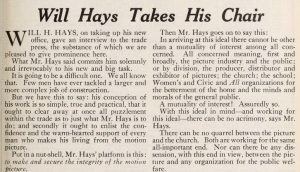 One of the concerns of the MPPDA, as Hays saw it, was to establish in the mind of the public that the industry was committed to producing films exemplifying a “clean moral tone.” One strategy that Hays soon began working on was the idea of instituting a system of self-regulation of motion picture content. If the industry could do a sufficiently creditable job of censoring itself, they could stave off the uncomfortable yoke of government-imposed censorship while also demonstrating to the public that their intentions were so noble as to render external censorship superfluous. As early as 1924, Hays developed a set of guidelines which he called “the formula.” He felt that his formula, if followed carefully, would head off the most common complaints of local censorship boards across the country. By 1927, the Hays formula had evolved into a more formal list of what he called “Don’ts and Be Carefuls” — a list of content guaranteed to draw the wrath of censors (the “Don’ts”) and content that might well be prohibited if not handled with care (the “Be Carefuls”). Hays further formalized the process by appointing a “Studio Relations Committee” to oversee administration of these guidelines. Ultimately, in February of 1930, a fully formalized Motion Picture Production Code was published, as reported in the February 19, 1930 edition of “Variety”: 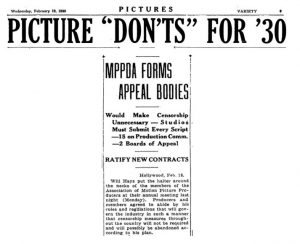 The article’s sub-heading expresses the MPPDA’s optimistic hope that censorship would henceforth be rendered unnecessary. This version of the code spelled out in some detail what content was and was not permitted. In addition to restrictions on four-letter words and sexual content, it also specified that the portrayal of criminal acts must never be shown in a positive light, and that criminals should never be seen getting away with their crimes.

All production companies were expected to submit both their scripts and their finished films to the MPPDA for review, and to make any necessary changes prior to releasing the films to theaters. It became a routine matter to acquire “Hays office” approval on all productions. Compliance, however, was voluntary. This was fine, because, after all, industry self-censorship was seen as decidedly preferable to government censorship, and there didn’t seem to be a third option.

Attitudes changed, however, once the Great Depression of the late 1920s and early 1930s took its toll. With box office receipts sagging, drastic measures were called for. Every movie producer knows what it takes to “put butts in the seats” — sex and violence. But those were the very things that the Production Code forbade. Something had to give. As the threat of lost revenues began to outweigh the threat of government censorship, compliance with the Code began to diminish.

In the early 1930s, American films began to get downright racy. (Not by today’s standards, of course, but distinctly naughty by the standards of the time.) The infamous nude swimming scene from TARZAN AND HIS MATE (1934) is a notable example:

Clearly, scenes of this sort were not going to be allowed to go unchallenged. The Catholic Legion of Decency led the charge by threatening to organize a boycott until Hollywood cleaned up its act. The turning point came when Protestant and Jewish religious groups added their voices to the call for cleaner pictures, as reported in the June 16, 1934 edition of “Motion Picture Herald”: 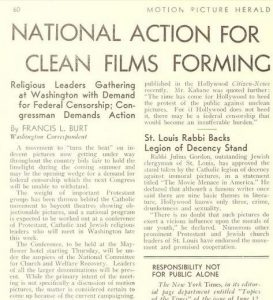 It seemed clear that the time had come to make compliance with the code compulsory. The Studio Relations Committee was renamed the Production Code Administration and given teeth in the form of the authority to levy fines for noncompliance. To further mollify the Legion of Decency a Catholic journalist, Joseph Breen, was chosen to head the PCA. The announcement appeared in the June 30 edition of “Motion Picture Herald”: 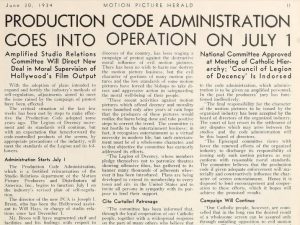 Just as an aside, you will sometimes see these racier films from the early 1930s referred to as “pre-code” films. This is not really accurate. The code, as we have seen, was formally announced in 1930, and existed in a prototypical form well before that. What is really meant by “pre-code” is “pre-code-enforcement” or “pre-PCA.” These films do not predate the Code; they predate the enforcement of the Code.

With the PCA in place, and the spicier tendencies of Hollywood pictures successfully tamed, American movies went back to being squeaky clean. People stopped referring to the MPPDA’s self-censorship arm as the “Hays office” and began referring to it as the “Breen ofice.” The religious community was pacified, and all remained quiet, more or less, on the censorship front for the next couple of decades.

Then, in 1948, Italian director Roberto Rossellini released an anthology film called L’AMORE, which consisted of two separate narratives. The second of these, entitled THE MIRACLE (IL MIRACOLO), tells the story of a simple Italian peasant woman, a shepherdess, who encounters a handsome passing stranger on the hillside while tending her sheep and believes him to be St. Joseph. The stranger (played by Federico Fellini) plies her with wine and seduces her. When she subsequently becomes pregnant, she believes that she is carrying the child of St. Joseph.

As you might imagine, when the film eventually was released in the United States, the Catholic Legion of Decency was not amused. The film, inevitably, was banned as sacrilegious. The picture’s American distributor, Joseph Burstyn, challenged the ban, pursuing appeals all the way to the U.S. Supreme Court. In a landmark ruling, the court reversed the 1915 Mutual v. Ohio decision, allowing for the first time First Amendment protection for motion pictures, as “Motion Picture Daily” reported in its May 27, 1952 edition: 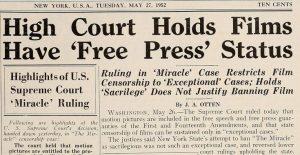 This legal sea change severely undercut the Production Code, but the PCA did not by any means immediately fold its tent. The court wrote its opinion sufficiently narrowly that the door was not firmly closed on all forms of movie censorship under all circumstances, so the former MPPDA, which had been renamed the MPAA (Motion Picture Association of America) in 1945, continued to attempt to exercise control over Hollywood movie content. Inevitably, however, the authority of the Code began to wither on the vine.

In 1966, Warner Brothers released WHO’S AFRAID OF VIRGINIA WOOLF? starring Elizabeth Taylor and Richard Burton. The PCA was loath to give the film a seal of approval, as the dialogue was plenty spicy, but the film had an impeccable literary pedigree, having been based on an Edward Albee play, so the case for denying it a seal was not a strong one. In the end, a compromise was struck. The film was released with an MPAA seal, but the studio agreed to include in its advertising a line indicating that the film was for mature audiences only. In addition, theaters agreed to restrict admittance accordingly, as can be seen in the notification at the bottom of the poster art: 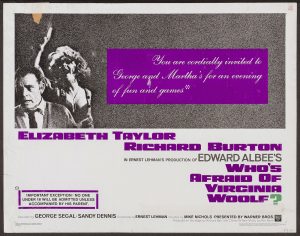 And thus was planted the seed that would eventually grow into the now-familiar ratings system. In 1968 the PCA, outmoded and largely shorn of its former authority, was formally retired. In its place the MPAA established the Code and Rating Administration. It was no longer acceptable to censor films outright, but it was still okay to label them as to potentially objectionable content and to restrict admission by age groups.

It had been a decades-long journey for American cinema from circus sideshow status to recognition as a constitutionally protected art form. As the ratings system took over for the constricting straitjacket of the Production Code, a new Hollywood was poised to move into the 1970s with a renewed aesthetic vigor, melding the newfound freedom of content with influences from European and Asian cinema to produce mature and fascinating works.