One century ago this week, in its April 13, 1918 edition, “Motography” noted the verdict in a case that would have profound implications for what would become the dominant business model for the American motion picture industry: 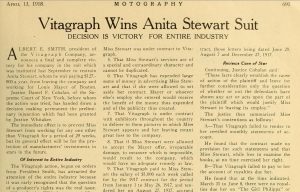 In the earliest days of storytelling movies the names of the actors who appeared in the films were not disclosed, let alone exploited for promotional purposes. But by 1918 it was well established that the popularity of certain performers with the ticket buying public could be a powerful selling tool. With fan magazines devoted to articles about the most popular actors’ lives now a fixture in the show business landscape, it was clear that the phenomenon of the movie “star” had arrived. There was no denying that the services of an actor with this star quality was a substantial financial asset to any film production company, and the stars’ compensation had escalated accordingly.

Once the financial exploitation of the public appeal of movie stars was accepted as a standard business practice in the industry, the obvious corollary was that investing in further enhancements of a given star’s popularity would tend to pay dividends. Studios would therefore employ publicists whose business it was to amplify to the fullest extent possible the fame and public esteem of their stars, and to service the public’s demand to know as much as possible about the objects of their adoration. Of course, in order to protect this investment, it only made sense to bind these actors to the studio with exclusive contracts. Why invest so much time and so many resources in building up a performer’s career if they could pick up at any time and take their services to a competitor?

By the mid-1910s, one of the most popular actresses working for the Vitagraph Company was Anita Stewart. In this magazine ad for a 1916 release, it is no accident that her name appears in a larger typeface than the title of the film: 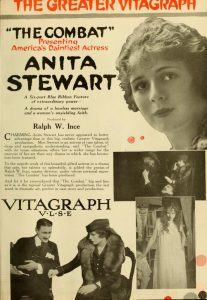 Billed as “America’s daintiest actress,” it is clear that Stewart’s name is the main selling point for the picture. Nor did her name and likeness appear only in movie ads, as witness this Anita Stewart paper doll feature from “Ladies’ World Magazine” in December of 1916: 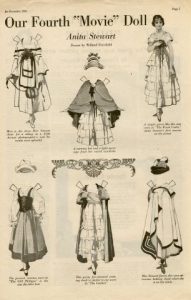 And also this collector’s plate: 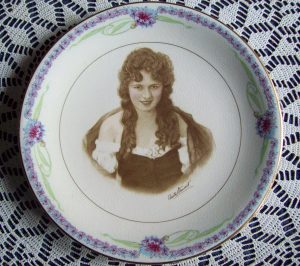 Stewart seemed happy enough at Vitagraph, but toward the end of her contract with them she was lured away by an ambitious young businessman seeking to make his move from movie exhibition and distribution into movie production. This young go-getter was Louis B. Mayer, who in time would rise to the very top of the Hollywood pyramid. But at this point in his career he was still a hungry wannabe seeking to make his mark in the production arena — and to do that, he needed a star. He promised Stewart her own production company, “Anita Stewart Productions,” along with a substantial boost in salary. The offer was too enticing to refuse, so Stewart accepted.

There was just one hitch: although her Vitagraph contract was nearing its expiration, it had not yet run its full term. When she left them with a few months remaining in the term of the contract, Vitagraph sued. They contended that in addition to compelling Stewart to return to Vitagraph for the remainder of the contract period, they should be allowed to extend the life of the contract by the amount of time she had been away pursuing her new career move with Mayer. As the article shown above reports, in April of 1918 the court ruled that Vitagraph could enforce its contract in full, including the extra time tacked on to the end of the term to make up for Stewart’s time away.

This was acknowledged at the time to be an important legal precedent for the industry, but in 1918 they could scarcely have appreciated just how important it would ultimately become. The system of exclusive contracts pioneered by Adolph Zukor and others would become the foundation of a business model that by the 1930s would grow into a massive and enormously profitable studio system. The major studios of the 30s and 40s would have everyone under exclusive contract — stars, producers, directors, writers, and everyone else whose labor contributed to the creation of motion pictures. The result was a factory-like environment that turned out new releases with extraordinary efficiency.

The linchpin, as always, was the roster of stars that the studio had under contract. By this time, the studios’ control over the actors’ careers spilled over into their personal lives. They were told who to be seen with in public and how to conduct themselves. Any regrettable lapses in their public conduct, like, say, getting drunk and trashing a hotel room, were dutifully covered up by studio publicity people who knew how to keep the stories out of the newspapers. Because stars’ contracts typically ran for a seven year term, studios were actually willing to take unknowns and build them into new stars. This represented a substantial investment, but it was worthwhile because the newly minted star couldn’t just go out and peddle their services to the highest bidder. They were contractually obligated to stay with the studio that had made them a star at least long enough for the studio to more than recoup their investment.

None of this would have been possible if the court in the Anita Stewart case of 1918 had failed to reaffirm the binding nature of star contracts.

Even during the height of the studio system, however, the inflexibility of studio contracts was occasionally challenged. In 1936, James Cagney, dissatisfied with the repetitious gangster roles into which he felt he had been typecast, left the Warner Brothers studio to act as a free agent. No legal action was ultimately necessary to compel his return, as it happened. All the other studios recognized the danger involved in setting a precedent, so Cagney quickly found that no one was prepared to hire him on a freelance basis. Seeing no other viable career options, Cagney returned to the fold at Warners. In the same year, 1936, Bette Davis accepted a role in England in violation of her Warner Brothers contract. This time Warner Brothers did file a lawsuit. As in the Anita Stewart case two decades earlier, the English court that heard the case sided with the studio, and the contract was upheld, compelling Davis to return to Warners. 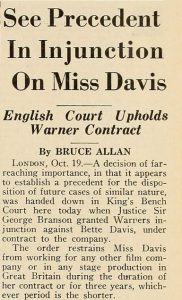 In 1944, however, the legal landscape underwent a startling tectonic shift with respect to studio contracts. Warner Brothers star Olivia de Havilland, unhappy with the roles in which she had been cast, refused a role and, as was the studio’s custom in such cases, was put on suspension. The accepted practice (dating back to the Anita Stewart case) was that, when a recalcitrant actor was put on suspension as a punishment, the studio had the right to add the period of suspension onto the end of their contract. The result was that a particularly feisty star with lots of suspensions could find his/her contract extended and re-extended and re-re-extended, theoretically indefinitely. De Havilland consulted a lawyer and decided to challenge the extension of her contract stemming from her suspension.

De Havilland’s attorney relied upon California Civil Code Section 1980 (subsequently repealed but still in force when de Havilland signed her contract in 1936) and upon the California Labor Code Section 2855, both of which prohibited enforcement of a “contract to render personal service…beyond seven years from the commencement of service.” In March of 1944, Judge Charles Burnell ruled in de Havilland’s favor. He rejected Warner’s argument that there should be a special exception in the case of movie stars, saying that allowing such an exception “would amount to virtual peonage. It might result in an indefinite extension of contractual relations, even to the point of constituting life service.” 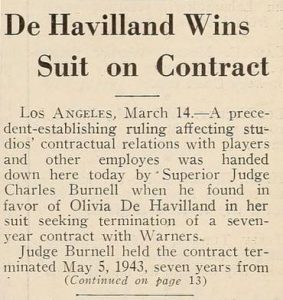 The sub-heading on the “Motion Picture Daily” article of March 15, 1944, shown above, tells the tale: “Suspensions Out in Future.” For the major studios, this forecast was ominous indeed. They could see their most potent tool for keeping stars in line, and indeed for keeping them in the fold, slipping away. Naturally, Warners appealed. But the appellate court agreed with Judge Burnell, and the California Supreme Court declined to hear the case, ending the matter.

De Havilland’s legal victory came much too late to help Anita Stewart, but was just in time to help those actors who would soon be returning to the studios from World War II military service. Absent this legal precedent, those actors could well have found their years of military service counted as suspension periods and added on to the terms of their contracts. As it was, as long as more than seven years had elapsed since signing their contracts, they were free to negotiate new contracts, potentially on better terms.

As for the major studios, De Havilland v. Warner Brothers Pictures was the first big nail driven into the coffin of the studio system. The final nail would come in the form of a Supreme Court ruling on an antitrust action against the majors some four years hence. Subsequent to that, the 1950s would see the gradual unraveling of this supremely efficient movie-making business model, compelling the Hollywood industry to re-invent itself virtually from the ground up.