One century ago this week, in its April 6, 1918 edition, “Moving Picture World” reported on the newest release from renowned director D. W. Griffith: 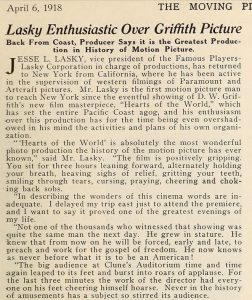 Any picture directed by Griffith was bound to attract attention, of course. In a time when movie stars had become the primary marketing tools for new releases and the names of directors were largely unknown to the general public, Griffith had become the rare exception — a brand name director. His Civil War drama, THE BIRTH OF A NATION, had been an enormous box office success in 1915 despite (or perhaps, in part, because of) the social controversy it had generated. His next film, INTOLERANCE (1916), had been even more ambitious and costly, but although it was hailed as an artistic triumph (both then and now) it had been a box office flop. Industry watchers were therefore intensely curious to see whether his 1918 release, HEARTS OF THE WORLD, would be another money-loser or a return to the popular success he had enjoyed with BIRTH.

In at least one respect, Griffith had the wind at his back with this new release. HEARTS OF THE WORLD was to be Griffith’s contribution to the flurry of films designed to whip up patriotic fervor as World War I heated up. There were a number of films released in this vein, generally portraying Germans as Teutonic Hun barbarians. Here’s an ad for one particularly juicy example: 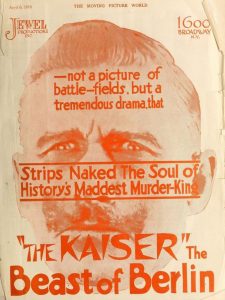 The public was primed for such pro-war propaganda, and there was governmental support to be had for producing it. In this case, however, it was the British government that was the prime source of encouragement. Politicians in the United States were not yet uniformly convinced that their country had any business becoming involved in this European conflict. Consequently, the British government had launched a propaganda campaign in the U.S., seeking to portray the conflict as a kind of last stand against incarnate evil. When they approached Griffith about making the war the subject of his next film, he was receptive, perhaps recalling that his greatest financial success had, after all, been a war film.

Griffith journeyed to Europe to prepare the project, and was given a VIP welcome. He was wined and dined and received with open arms in the finest salons and in the highest corridors of political power, meeting with elite figures ranging from media tycoon Lord Beaverbrook to Prime Minister Lloyd George. Such blandishments could scarcely have failed to turn the head of even a man of modest ego. For Griffith, whose self-regard was robust and devout, it was irresistible catnip. It was settled: the next Griffith feature would be a tale of contemporary wartime struggle and sacrifice.

In the film itself, Griffith dutifully served up the requisite images of the brutal, sub-human German swine, as can be seen in the imagery of this poster: 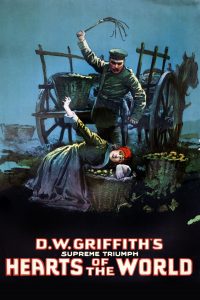 Still, he was not able to bring himself to go as far as the lurid portrayals to be found in such naked agitprop as THE KAISER: THE BEAST OF BERLIN. Griffith’s German villains were vile indeed, but not all of Griffith’s Germans were villains. Even so, he reportedly felt in retrospect some pangs of conscience, worrying that he might have painted the German national character with too broad a negative brush. One can only assume that he did not see the obvious irony in this repentance, given that he felt no such regret at having painted the supposed moral inferiority of the African American race with at least as broad a brush in THE BIRTH OF A NATION.

HEARTS OF THE WORLD did well. It was less profitable than it might have been only because Griffith spent more than was necessary to glam up the roadshow screenings — hiring a large orchestra to accompany the film, erecting massive banners and electric signs in front of theaters, buying inordinate amounts of advertising — but even so, he ended up in the black, as did his partners in the venture. Today the film is less well remembered than many of Griffith’s other features, although it is not entirely clear why that is. It may not represent Griffith at the very top of his game, but it is by no means an inferior work. It may be that its unabashed propaganda component taints its purity as a creative work in the estimation of some.

What no one would have guessed in 1918 was that the cinema’s golden boy was nearing the end of his prime. He would continue to be a marketable name for some years to come, and indeed in 1919 he would become one of the founders of United Artists along with Mary Pickford, Douglas Fairbanks, and Charlie Chaplin. And he would have more box office successes, like WAY DOWN EAST (1920) and ORPHANS OF THE STORM (1922), along with artistic triumphs like BROKEN BLOSSOMS (1919). But by the mid-1920s, as the silent cinema was growing into the full flowering of its aesthetic maturity, Griffith’s cinematic creativity was overtaken and surpassed by the work of others. The work of the director who had been hailed as the great innovator of cinematic storytelling began to look distinctly old-fashioned.

Speaking of Griffith’s reputation as an innovator, it must be said that his prominence as the supposed singular architect of cinema’s narrative aesthetic has been greatly exaggerated. He and his cameraman, Billy Bitzer, undoubtedly blazed new trails. But so did many others. The early years of the development of narrative cinema were a heady and yeasty period of intoxicating ferment. No one really knew how to tell a story with this new medium, so everyone was making it up as they went along. Experiments were tried, failed efforts were cast aside, and every now and then a new idea would strike a spark and everyone would seize upon it and try to refine it further. Griffith and Bitzer contributed to this process in a substantial way, no question about it. But so did Maurice Tourneur and Lois Wilson and Allan Dwan and Alice Guy-Blache, among many others. And yet, a silent cinema neophyte could be forgiven for coming away from an initial exposure to film history texts with the impression that Griffith alone created the narrative language of the cinema.

Well then, with so many people contributing to the development of this new art form, why the outsized emphasis on D.W. Griffith? The answer, I think, lies with the fragile nature of the primary source material. Early films were shot on a cellulose nitrate based film stock, which is chemically unstable. After a few decades it will simply decompose. Ultimately all that will be left is a pile of ashes, but long before that the degradation of the images on the film will render it unwatchable, and then sprocket hole shrinkage will render it unprojectable. In order to preserve these nitrate films, they must be copied onto the more stable cellulose acetate film stock that was eventually developed. (Or, given today’s technology, one can just digitize them.) But for most silent films, such rescue efforts came too late. The sad fact is that some 90% of all the silent films ever made are permanently lost. We will never see them.

That, it seems to me, is the reason for Griffith’s disproportionate credit as an innovator. By sheer chance, it so happens that the majority of his films have survived. We know about his innovations because we have the evidence. Undoubtedly there were many others contributing similar advances, but we will never know about them because we just don’t have their films. We’ll never know how many of the techniques attributed to Griffith were originated by someone else and merely imitated by Griffith. All we know for sure is that the corpus of works left behind by Griffith offers a neatly packaged compendium of the evolution of cinematic storytelling techniques.

If we want to be honest, the best we can do is to treat that body of work as a synecdoche — a trope in which a part is used to represent the whole. The D.W. Griffith who pioneered the art of the cinema is not the actual man, but rather a symbolic figure, a construct of the historian’s art of narrative. He is the personification of the sum total of the creative efforts of all the early filmmakers whose work is forever hidden from our view. Through a kind of historical alchemy, Griffith’s legacy has been transmuted from the dross of an actual life’s work into a golden abstraction. It’s a useful abstraction, to be sure, but it remains incumbent on historians to be wary of taking the idealized Griffith legacy literally. If we make the mistake of drawing historical conclusions based on that gilded ideal, we will end up with nothing more than a handful of fool’s gold.