One century ago this week, the trade paper “Moving Picture World” announced that Charles Chaplin had begun work on the first production in his newly constructed studio. This would turn out to be A DOG’S LIFE (1918), his first film for First National.

Producing films for First National was different from the work he had done for Mutual, and before that for Essanay,  and before that for Keystone. First National was not a studio per se, but rather an exhibitors’ circuit that had banded together to make deals directly with some of the top stars in Hollywood. Weary of having to put up with the draconian terms imposed on exhibitors by Adolph Zukor’s Paramount, these theater chains pooled their resources to lure stars such as Mary Pickford away from their exclusive Paramount contracts with an offer that was too good to turn down. First National would finance independent productions featuring a particular star with no strings attached other than the right to exhibit the finished product in their theaters. This gave the stars complete creative control over their work, something not to be found within the confines of a traditional studio with its top-down management.

However, it also meant that no studio facility would be furnished. A star who made such a deal with First National would have to secure a place to work on their own hook. Fortunately, building a studio from scratch was well within the financial means of a top talent like Chaplin, so that’s exactly what he did. No longer a studio employee, Chaplin was now an independent producer. The studio he had constructed was located at the corner of La Brea and Sunset. 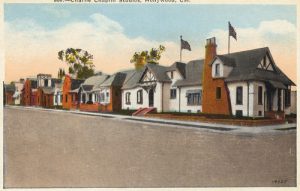 This section of Los Angeles was still largely residential, so to minimize the residents’ concerns about the encroachment of a movie studio into their neighborhood (and to provide himself with a comforting reminder of his home country) Chaplin had the exterior structures designed to resemble the houses along a typical English village street.

Here is Chaplin himself describing the construction of the studio facility:

The clip is from a film called THE CHAPLIN REVUE (1959), which compiled three of Chaplin’s First National releases, accompanied by a music score composed by Chaplin himself.

Although Chaplin would move on from his First National deal to form United Artists with Mary Pickford, Douglas Fairbanks, and director D.W. Griffith, he continued to work at the La Brea studio facility until his departure from the United States in 1952 to take up residency in Switzerland.

The former Chaplin studio still stands, having been officially declared a Los Angeles Historical-Cultural Monument in February of 1969. It has passed through several owners, and is now the headquarters of the Jim Henson Company. In tribute to the artist who created this legendary space, a 12-foot statue of Kermit the Frog dressed as the Little Tramp stands above the main gate. 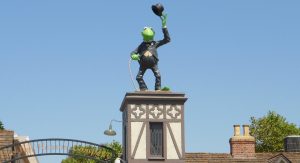