Believe it or not, there was a time when movie producers deliberately refrained from publicizing the names of the actors who appeared in their films. Their reasoning was that there would inevitably be some actors whose work pleased the moviegoing public more than others. If the public knew their names, they could ask for movies featuring those actors by name. This would put those actors in an advantageous bargaining position, allowing them to demand more money for their services.

Of course, with the benefit of hindsight, we now know that their reasoning was absolutely correct. That’s exactly the way it does work.

The stratagem of suppressing the names of the actors worked for a while, but as a long-term policy it was not tenable. For one thing, if the public did not know the name of a favorite actor, they would simply invent one. For example, an early favorite with audiences was a young actress working for the Biograph Company whose name was Florence Lawrence. Her fans, undeterred by the fact that they had no idea what her name was, began asking for more films with “The Biograph Girl.”

Eventually the production companies realized that the high cost of retaining the services of especially beloved actors could be passed along to the exhibitors. Publicizing the names of their actors was therefore acknowledged as the potent marketing tool that it was, and the performers who enjoyed the highest degree of public acclaim began to reap the economic benefits of their popularity. The phenomenon of the movie “star” had been born.

The exhibitors, naturally enough, chafed at having to deal with higher rentals. A century ago this week, in its February 23, 1918 issue, “Moving Picture Weekly” reported that a Michigan exhibitors’ association went so far as to ask for a congressional inquiry into the “high cost of film production.” 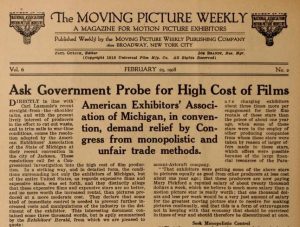 In truth, there was more going on than just higher salaries for movie stars driving higher rental rates for their films. Adolph Zukor at Paramount, an early proponent of the “star system,” had hit upon the idea of signing top stars to long-term exclusive contracts so that he could leverage his position as the only source of their films to exert even greater pressure on exhibitors. Why let a prized acquisition like the newest Mary Pickford release go to market at any price when instead it could be used to insure a market for other products with a lesser box office appeal? Consequently, Zukor began withholding the films of his top stars as individual products, making them available only as one component of a block of films. The practice was known in the industry as “block booking,” but Zukor, with the Orwellian cunning of a shrewd marketer, opted for the benevolent-sounding phrase “open booking.”

Here is a Saturday Evening Post ad from 1917 promoting “open booking,” and encouraging the moviegoing public to ask their local movie theater manager to get with the program: 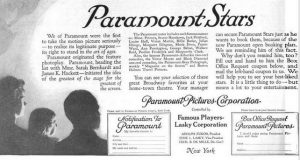 “You can see your selection of these great Broadway favorites at your home-town theatre,” the copy reads. “Your manager can secure Paramount stars just as he wants to book them, because of the new Paramount open booking plan. We are reminding him of this fact. Why don’t you remind him too?” The ad helpfully provides two cut-out forms for the purpose, one to submit to the theater management and the other to send to Paramount to notify them that the theater request form had been submitted.

No wonder the exhibitors wanted the government to look into Paramount’s business practices, especially since other major studios began following his lead.

So, did the government intervene? Yes, but it would be decades before the practice of block booking would be entirely extinguished. A complaint was filed by the Federal Trade Commission on August 30, 1921, but the wheels turn slowly in such matters. Some 17,000 pages of testimony and 15,000 exhibits later, the FTC issued its ruling on July 9, 1927: Zukor and his business partners were guilty of restraint of trade under the terms of the Sherman Antitrust Act and were ordered to cease and desist the practice of block booking and other related practices.

Zukor, however, had no intention of meekly complying. The July 16, 1927 edition of “Moving Picture World” reported that Zukor had announced his intention to appeal to the Supreme Court: 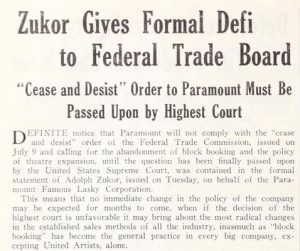 In November of 1930, the Supreme Court obliged, as reported by “Motion Picture News:”

This would seem to have settled the matter once and for all, but keep in mind that this is 1930 we’re talking about. In the midst of the Great Depression, the Roosevelt administration was not inclined to hold major industries strictly accountable for minor peccadilloes like monopolistic behavior. The economic house was on fire; there would be time for addressing corporate bad behavior when the emergency had passed. The motion picture industry sought, and found, refuge under the benevolent umbrella of the National Industrial Recovery Act, and in 1933 struck a deal with the government under which the Supreme Court ruling remained unenforced.

In 1935, the National Industrial Recovery Act was struck down by the Supreme Court, effectively removing the protective blanket under which the major studios had been operating. (And by this time, of course, it’s not only Zukor’s Paramount — all the major studios practiced block booking.) In due course, the Justice Department filed suit against the majors (in July of 1938), but the legal wrangling dragged out another ten years before the Supreme Court finally handed down a definitive ruling. In May of 1948, by order of the Supreme Court, the onerous practice of block booking, which had seemed to have more lives than nine cats, was outlawed once and for all, some 30 years after outraged exhibitors had appealed to the government for its intervention.

The consequences of that Supreme Court ruling would be far-reaching, shaking the motion picture industry to its foundations, and ultimately bringing about a radical change in their way of doing business. But that’s another story for another time.