In the back pages of its June 1, 1918 edition, one century ago this week, “Moving Picture World” ran the following news item:

It was a minor item tucked away at the bottom of the page, one of many such announcements of studio comings and goings. Tod Browning was, after all, a director of no particular importance at this stage of his career. And the Bluebird brand, for whom he had been engaged to make pictures, was not a top-tier brand.

Carl Laemmle at Universal had recognized early on the advantage of introducing tiered branding. In 1916 he had introduced three subsidiary Universal brands — Jewel, the premium brand, featuring high-profile stars and big budgets; Red Feather, the economy brand with low budgets, shorter running times, and relatively unknown actors (what would later be called “B pictures”); and in between these two extremes, the Bluebird brand. The Bluebird pictures would have substantial, but not extravagant, budgets and longer running times than the Red Feathers. The key marketing strategy for the Bluebirds was to promote them as superior storytelling to compensate for their lack of big-name stars.

Although these were Universal subsidiaries (in the same way that, for example, Focus Features is a Universal subsidiary today), they were represented to the public as separate companies, downplaying their connection to Universal. Here’s the headline announcing the Bluebird imprint as it ran in the January 22, 1916 edition of “Motion Picture News”:

And here’s a portion of a Saturday Evening Post Ad of June 24, 1916, making the case to the viewing public that a good story is, after all, more important than a big-name star, and seeking to buttress the argument by invoking Shakespeare’s phrase “the play’s the thing.” : 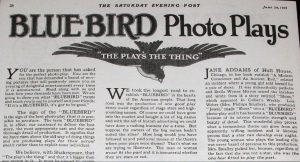 Tod Browning, Bluebird’s newest director as of June of 1918, had gotten his start in show business traveling with carnivals and circuses. His fascination with sideshow attractions and carnival hucksterism would inform his creative work throughout his career. Along the way he had acquired some experience as a performer, chiefly in vaudeville turns of one sort or another, before landing some moving picture roles in short comedies for the Biograph Company. His real calling, however, lay behind the camera. He had directed for Reliance-Majestic and Metro before making the move to Bluebird.

Browning most likely attached no greater importance to his move to Bluebird than the passing mention in the trade papers would seem to have assigned it. In fact, however, it would prove to be a decisive turning point in his career. Being brought into the Universal fold brought Browning into contact with Irving Thalberg. The young Thalberg would eventually go on to become the wunderkind of Hollywood during his tenure at MGM, but at the time of Browning’s hiring at Universal Thalberg was was working there as an executive secretary to Carl Laemmle. Thalberg’s insightful suggestions had so impressed Laemmle that in early 1919 he was appointed as Universal’s head of production.

It was in that capacity that Thalberg paired Browning with a talented but largely unknown character actor named Lon Chaney. Their first film together was a Priscilla Dean vehicle called THE WICKED DARLING (1919). It was a typical Hollywood release of the period, competently made but by no means a classic. (You can judge for yourself, by the way. Although it was long believed to be a lost film, a mildewed but watchable copy was recently found in the Netherlands. Here’s a link if you’re curious.) And yet this otherwise unremarkable picture has earned a place in cinema history as the beginning of one of the most fruitful actor-director relationships Hollywood has produced.

Every now and then an actor and a director seem to fit together like a hand and a glove. Think, for example, of Martin Scorsese and Robert De Niro, or Akira Kurosawa and Toshiro Mifune, or Ingmar Bergman and Liv Ullmann, or Francois Truffaut and Jean-Pierre Leaud. Tod Browning and Lon Chaney were that kind of pairing. Browning’s carnival background had left him with a fascination for those who exploited their physical oddities or deformities in a show business context — those who displayed themselves in the “freak shows” for which he had served as a huckster in his carny days. Chaney, for his part, had a talent for exotic character makeup, and was willing to go as far as to create persuasive distortions of his own face and body extending well into the grotesque. Hand, glove.

But in order for the pairing of Browning and Chaney to produce a significant body of work, there had to be a market for the kinds of stories they were prepared to tell. As it happens, 1920s audiences did have an appetite for the kinds of disfigurement that Chaney was capable of simulating. Entirely separate from his work with Browning, Chaney established himself as a star largely on the strength of such portrayals, including the double amputee he played in THE PENALTY (1920), his role as the misshapen Quasimodo in THE HUNCHBACK OF NOTRE DAME (1923), and, of course, his bravura performance as THE PHANTOM OF THE OPERA (1925), for which he reshaped his face into the image of a living skull. These extreme transformations earned Chaney the sobriquet “The Man of a Thousand Faces,” and prompted the often-repeated joke, “Don’t step on that spider — it might be Lon Chaney!”

It’s worth asking why such grotesque portrayals found such a ready market among audiences of the period. One theory is that this was a society that was just emerging from the horrors of World War I, and still dealing with its emotional aftermath. Ironically, part of that lingering emotional trauma was the result of medical breakthroughs that represented a positive boon to society. Due to recent advances in medicine, gravely wounded soldiers who in earlier wars would have died on the battlefield were often successfully treated and returned to their families, alive but horribly deformed. As a result, the families of these wounded warriors had to find a way to cope with the unpleasant reality of feeling physically repulsed by a beloved family member. These feelings naturally gave rise to feelings of guilt. With that in mind, it is perhaps not so surprising to see this emotional turmoil bubbling up in the popular culture in the form of movies featuring grotesquely deformed characters.

When Chaney and Browning returned to working together after a hiatus of a few years, the result was electric. Chaney’s facility with creating deformed characters meshed with Browning’s morbid fascination, and the gestalt of their talents interlocked with the public’s receptiveness to damaged characters to create a fascinating series of films. In particular, THE ROAD TO MANDALAY (1926), THE UNKNOWN (1927), and WEST OF ZANZIBAR (1928) constitute disturbing meditations on the ravages of deformation, both physical and psychological.

The extraordinary collaboration of Browning and Chaney was tragically cut short by Chaney’s untimely death in 1930 at the age of 47. Following Chaney’s death, Browning moved away from tales of mutilation and into more conventional horror film territory, directing Bela Lugosi in Universal’s adaptation of DRACULA (1931). But he had one more disturbing and provocative tour de force on the subject of human deformity up his sleeve — the macabre and nightmarish FREAKS (1932). Without Chaney’s makeup wizardry to draw on, he used actual sideshow performers in a disquieting tale set among the carnival troupers he knew so well.

But after the financial failure of FREAKS and a few more films without Chaney, he left the movie business, retiring in 1939, and lived out the last two decades of his life in virtual anonymity. The seed that was planted by Browning’s move to Universal a century ago this week had flowered and withered in just over a decade. But for that brief period it had moved Browning from the back pages of the trade papers to the front pages as one of Hollywood’s most celebrated artists of the uncanny and the bizarre.

POSTSCRIPT: I had originally intended to embed images of wounded World War I soldiers above to help make the connection with Browning and Chaney’s films, but thought better of it. If you’re genuinely curious, look up the “union des gueules cassées,” or “union of broken faces” or just look up “World War I deformity.” But I caution you to steel yourself before looking at the accompanying images. This is genuine nightmare fuel — which, of course, is exactly how Browning and Chaney used it.