One century ago this week, in its June 15, 1918 edition, the industry trade paper “Motography” featured the following announcement: 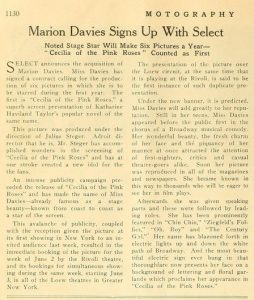 If this strikes you as a very elaborate trade paper item for what is, after all, only the second screen appearance in the incipient career of a fledgling starlet, you’re right. Normally such an announcement would have been tossed off in one brief paragraph. But, as the article points out, the career of young Marion Davies had been the subject of “an intense publicity campaign” entailing “an avalanche of publicity.” Here’s an example of what they were talking about: 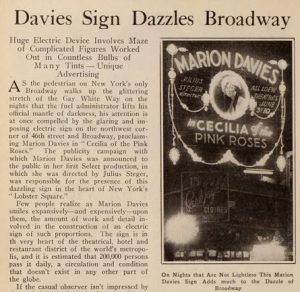 Well, for heaven’s sake. A few extra column inches in the trades is one thing, but for a previously unknown actress to have an enormous electric sign on Broadway promoting her sophomore screen acting effort, she’s got to have some serious juice behind her, and not just the electrical kind.

And indeed she did. Davies had caught the eye of William Randolph Hearst, the multi-millionaire newspaper tycoon. Their affair would mature into a long-term relationship in the coming years. They never married — Hearst never divorced his legal wife, Millicent — but they lived together openly as a couple for many years. In 1918, with both her career and their relationship just beginning, the love-smitten Hearst was determined to spare no expense in making Davies a star.

Hearst already had a presence in the movie industry. Indeed, he was a “king of all media” long before Howard Stern was born. In addition to the Hearst International Film Service, which produced animated cartoons in order to further capitalize on the Hearst newspapers’ comic strip characters, he also produced newsreel films through his International Picture Service, an outgrowth of his wire service. In the arena of live action feature films, he had partnered in 1917 with Ivan Abramson to create the Graphic Film Corporation. Abramson wrote and directed the films, while Hearst provided financial backing as well as mobilizing the considerable publicity resources at his disposal. The Graphic films tended to exploit lurid, sensationalistic subject matter — a good fit with the ambulance chasing yellow journalism on which the success of the Hearst newspapers largely rested.

To showcase his new love interest, however, something classier was called for. Rather than make Davies a Graphic Film star, he set up the Marion Davies Film Company as the entity producing her new project, CECILIA OF THE PINK ROSES. 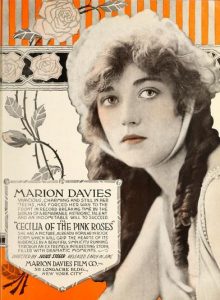 At the premiere screening, Hearst had hundreds of real roses placed in front of electric fans to waft the floral scent throughout the theater. Although originally announced in the trade papers as a Graphic production, CECILIA OF THE PINK ROSES was in short order attached to a new distribution deal with Lewis Selznick’s Select Pictures Corporation, as noted in the “Motography” clipping above. Hearst would soon part company with Abramson and Graphic altogether to create Cosmopolitan Productions, named after the magazine (which was owned by Hearst, naturally). It was under the Cosmopolitan banner that later films featuring Davies were produced.

Although Davies did fulfill Hearst’s ambition of making her a genuine movie star, her career did not reach the heights that it might have. Ironically, this was due in large measure to Hearst’s own influence. Davies had an engaging personality and a genuine talent for light comedy. Left to her own devices, she might have become as successful at these comic turns as Mabel Normand had been in the more knockabout arena of slapstick comedy. But Hearst couldn’t bear to see his beloved mistress laughed at. It was as if he could not distinguish between derisive, mocking laughter and the appreciative laughter of comedy audiences. He therefore insisted on casting Davies in lavish costume dramas. Diverted from her sparkling comic work into a type of film that elicited from her merely adequate performances, she failed to achieve the flights of brilliance to which her talents might otherwise have lifted her.

Ultimately Davies was fated to be remembered more for her role as Hearst’s long-term mistress than for any of her screen roles. She and Hearst hosted regular parties at his massive California estate, San Simeon, which were attended by the cream of the Hollywood elite. The extra-marital bliss that the illicit couple so blatantly flaunted was the rhinoceros in the living room that no one dared to mention. It was, after all, not wise to offend the owner of a chain of newspapers if one worked in a business where bad publicity could be the kiss of death.

Still, it is said that Dorothy Parker, whose quick and lethal wit was legendary, noticed a statue of the Virgin Mary that had been placed in a recess above a doorway at San Simeon and wrote the following in one of the guest books:

Upon my honor, I saw the Madonna
Standing in a niche
Above the door of a well-known whore
And a first-class son of a bitch.

But the most forceful critique of their relationship was a fictionalized one. When theatrical prodigy Orson Welles was lured to Hollywood with an unprecedented contract that allowed him total creative freedom, he and his screenwriter, Herman Mankiewicz, decided that his first project for RKO Radio Pictures would be based, loosely but unmistakably, on the life and career of Hearst. The resulting film, CITIZEN KANE, was an artistic triumph, still generally regarded as one of the best films ever to be produced in Hollywood. Certainly it must be counted among the most influential films ever made.

Hearst had been fictionalized in movies before, and was not always magnanimous about it. For example, this notice in the February 7, 1919 edition of “Variety” notes that a film called ENEMIES WITHIN, directed by George Fitzmaurice, had been withdrawn from release after Hearst objected to a negatively portrayed character that was too obviously based on him: 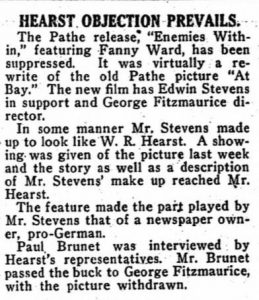 And this was merely a critique of Hearst’s politics, not his personal life, and certainly not touching upon his relationship with Davies.

The screen portrayal of Welles’s Charles Foster Kane, on the other hand, represented a more comprehensive critique of Hearst. The brash young Welles had always found controversy to be his friend, from the leftist play THE CRADLE WILL ROCK that got him into hot water with the Federal Theater Project to the furor over his radio broadcast of THE WAR OF THE WORLDS. In each case, being embroiled in a highly public fracas had seemed to redound to his benefit more than to his censure. Indeed, hot water seemed to be his natural habitat. Consequently he did not shrink from portraying the personal life of Kane in a way that would reflect the Hearst-Davies relationship, and in a manner that was as unflattering as it was unmistakable.

Kane’s paramour in the film, Susan Alexander, whose doomed singing career he vainly attempts to prop up, is by no means a close analog for Davies. After all, Davies did have genuine talent and was on a trajectory to have a career in show business before Hearst intervened. In fact, Welles later expressed some regret on that account. He felt no qualms about his implied portrayal of Hearst, but he did feel in retrospect that the character of Susan was unfair to Davies.

Hearst, predictably, was incensed by the film, and sought to have it pulled from release, as he had successfully done with ENEMIES WITHIN. “Motion Picture Herald” reported on Hearst’s ultimatum to RKO in its January 18, 1941 edition: 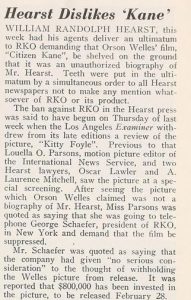 But RKO, after some initial wavering, held firm and went ahead with the release, as Film Bulletin reported on May 3 in an article headlined “Citizen Hearst Strikes Back”: 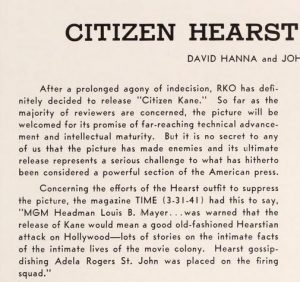 By May 21, “The Film Daily” reported that Hearst had, in effect, surrendered to the inevitable, having realized that his campaign against the film was, in fact, giving it more publicity rather than suppressing it: 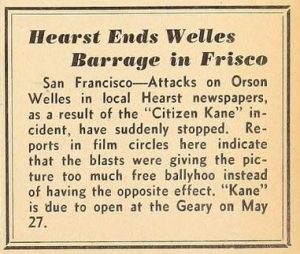 Whatever damage the film may have inflicted on Hearst’s ego, it did no perceptible harm to his relationship with Davies. This was another significant point of divergence between Davies and the character of Susan Alexander Kane. Susan eventually leaves Kane, but Davies, by contrast, remained devoted to Hearst for the rest of his life. In fact, when Hearst at one point ran into financial trouble, Davies willingly sold much of her jewelry to raise the funds to keep him afloat.

The extra-marital relationship heralded a century ago this week in the trades would eventually outlast much of the opprobrium it endured. It may not have been a Hollywood ending — the Production Code would never have sanctioned such an illicit coupling going unpunished — but it proved more enduring than many a legitimate Hollywood marriage, including those of Hearst’s nemesis, Orson Welles.