One century ago, in its March 23, 1918 issue, “Motion Picture News” noted that the Ince Studio was operating ahead of schedule: 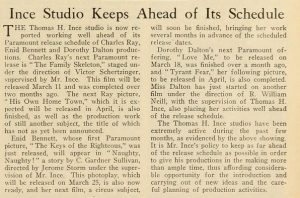 To those familiar with the operations of the Ince Studio, this would hardly have been surprising. Whatever else one could say about the studio head, Thomas H. Ince, no one would deny that he ran a tight ship.

Many of the figures who assumed early leadership positions in the newly emerging moving picture industry came from backgrounds that were remote from show business. A striking number of them, for example, came into the nickelodeon business from the cloak-and-suiter trade, moving from haberdasher or furrier to movie theater exhibitor. Ince, however, came from a theatrical background. He was, in fact, a second generation show business veteran. His father was a comedian and his mother an actress, and he himself began appearing on stage in juvenile roles as a pre-teen and was playing substantial speaking roles by the age of fourteen.

Like many other actors, he found work as a performer in moving pictures, but soon he graduated from acting in them to directing them. It was while directing for the New York Motion Picture Company owned by Charles Baumann and Adam Kessel that Ince made the move out to the west coast to set up shop in Southern California.

In 1912, he substantially expanded the property holdings he had been using as a home base for productions and began to fashion what amounted to a small, self-contained city for the production of moving pictures. Indeed, by 1914, Inceville, as he by then had modestly christened the property, was granted its own post office, a tangible imprimatur of municipal autonomy, as “Moving Picture World” noted in its December 12, 1914 edition:

Inceville was designed to be an entirely self-contained production facility, located where Sunset Boulevard meets the Pacific Coast Highway. Its expansive acreage housed stages where sets could be constructed as well as scene shops for fabricating the sets, costume shops where wardrobes could be created, a commissary for feeding casts and crews, extensive prop storage, stables and a corral for over 300 horses, a powerhouse for furnishing electricity, and a reservoir for furnishing water. And, as noted above, a post office.

Ince was not, of course, the only movie pioneer to hit upon the idea of creating such a self-contained environment for making films. Carl Laemmle was accomplishing much the same thing at about the same time with his “Universal City.” A greater Ince legacy is perhaps to be found in the way he systematized the production process.

Early on, as a moving picture industry was just emerging out of what initially had been just another penny arcade novelty, the process of getting films made was a haphazard affair. It clearly needed to be a group effort, but there was little differentiation among job assignments. Actors might load props onto a truck and truck drivers might be recruited to appear in a scene as extras. The cameraman was very often expected to also direct the actors until it was realized that it made more sense for those two jobs to be split into two positions. In short, there was no paradigm for how to make a movie efficiently because no one had done it before. These folks were making it up as they went along.

Ince, however, had a better idea. He brought with him an understanding of how division of labor worked in the theatrical world, where specialists worked on just one aspect of a production — building sets, designing costumes, etc. This kind of specialization was gradually catching on throughout the film industry, but Ince took it to a new level. The promotional film below depicts the regimentation of the interdepartmental cooperation implemented by Ince (the studio shown, by the way, is not Inceville, but rather a separate lot where Ince had set up shop by the early 1920s, but his production system remained the same):

Ince imposed a layer of quality control by personally approving all scripts and sending them to the director with explicit instructions to shoot them exactly as written. This was in stark contrast to the then-common industry practice of using only a minimal script, if indeed any script at all. Sometimes a director would essentially work from a continuity that existed only in his or her mind (yes, there were female directors even then). But an Ince script was a blueprint for producing the film — a “shooting script.” Ince would also review the footage shot each day (the “dailies” or “rushes,” as they are called) and also the completed edit of each film.

What Ince had done, in effect, was to create a movie-making factory. With well-coordinated departments efficiently pooling their efforts it was possible to have multiple films in various stages of production simultaneously, guaranteeing a steady output of product on a predictable schedule. The systematic seed that Ince had planted would evolve over the next decade or so into an industry-wide studio system that could generate polished and reliably high quality releases with Swiss-watch precision and regularity. By the 1930s, building on the example set by Ince, Hollywood achieved something remarkable — they were able to produce motion pictures with something approaching the efficiency of an automobile assembly line. The reason this is so impressive is that every car that comes off a Detroit assembly line is identical to every other car that comes off the line. But Hollywood was able to very nearly match that efficiency while turning out products that were all different. Every movie is a unique product — even remakes. To generate them with the efficiency of a production line is a remarkable accomplishment.

One characteristic that has been widely attributed to Ince, perhaps a trifle unfairly, is a tendency to splash his name across his productions with as broad a brush as possible: “Thomas H. Ince presents a Thomas H. Ince production, personally supervised by Thomas H. Ince,” etc. There was ego involved, to be sure — there has never been a shortage of that to be found in Hollywood, then or now — but Ince was also concerned with building a brand. Rather than foregrounding the names of writers and directors who were unknown to the moviegoing public, Ince made his name the identifiable brand. While the names of movie stars are always good for branding, it was also useful to have a behind the scenes name that the public could associate with high quality entertainment.

Sound business motives notwithstanding, Ince’s penchant for self-promotion made him a prime target for ridicule. For example, silent comic Buster Keaton released a two-reel short subject in 1921 called THE PLAYHOUSE, in which Keaton’s character dreams that he is attending a show in which he himself plays every role. Through camera trickery, Keaton appears as every member of the orchestra simultaneously, and also as the stagehand, as every act onstage, and as every member of the audience. 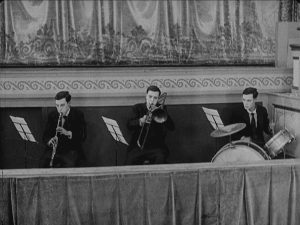 The culmination of the gag, and the definitive tip-off to any 1921 audience that Keaton was specifically ribbing Ince, was a shot of the show’s program: 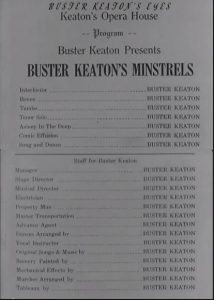 Keaton was by no means coy about confirming the target of his satire. Asked about it later, he quipped, “Thomas H. was my Ince-spiration.”