One century ago this week, the January 8, 1921 edition of “Motion Picture News” noted that theater mogul Marcus Loew had departed from his usual policy of playing movies at his theaters for no more than three or four days at a stretch before replacing them with new titles. The conventional wisdom was that after half a week or so most films were played out in the sense that every theater patron who wanted to see a given picture would have done so. To play a picture longer risked a dip in ticket sales. But in this instance Loew was making an exception to hold over a feature attraction for a full week, believing that its audience appeal would be sufficient to induce patrons to return to see it more than once.

The film that prompted this unusual treatment was THE MARK OF ZORRO, starring Douglas Fairbanks. It was the first rendering for the screen of a character called Zorro, originated by Johnston McCulley in his 1919 novel THE CURSE OF CAPISTRANO. Even more significantly, it heralded a new phase in the already stellar career of its lead actor.

Fairbanks was already a major star, having achieved fame and fortune through a distinctive and appealing screen persona. In a series of roles he had established a consistent characterization based on energetic athleticism and boyish enthusiasm that audiences found irresistible. His most successful narrative ploy was to play an effete and ineffectual young man who through enduring difficult circumstances finds within himself untapped personal resources that allow him to triumph. His persona combined the impishness and perpetual youth of Peter Pan with the brawny vigor of Tarzan of the Apes. (The latter influence being of particular significance in that Tarzan is both lord of the jungle and Lord Greystoke, a scion of the English peerage. Fairbanks and his movie star wife, Mary Pickford, would soon become de facto Hollywood royalty.)

He began developing his signature characterization on the stage in such plays as THE NEW HENRIETTA, but it caught on in a big way when he made the transition to movie roles. His screen persona seemed to hearken back to the ideal of the “strenuous life” advocated by Theodore Roosevelt, who had provided a real-life template for the persona by making a triumphant transition from a sickly childhood to a robust and successful adulthood. And at the same time, Fairbanks’s screen presence seems to have fostered a popular culture template for the concept of American exceptionalism, which would later prompt Henry Luce to declare the advent of an “American century.” His films showed American moviegoers a flattering image of their national character that they wanted to believe in. It’s no accident, I think, that a number of his pictures’ titles reflect this directly (AMERICAN ARISTOCRACY; THE AMERICANO; HIS MAJESTY, THE AMERICAN).

In its October 9, 1915 edition, “Moving Picture World” recognizes in its review of THE LAMB, Fairbanks’s first starring film role, that a new star in the Hollywood firmament is ascendant: 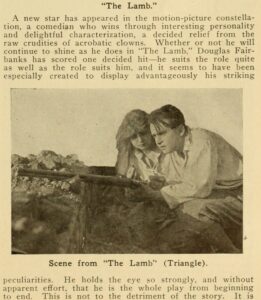 THE LAMB, as its title suggests, delineates the Fairbanks formula of portraying the progression of a young man from an ineffectual “lamb” to a heroic go-getter.

But with THE MARK OF ZORRO, Fairbanks took this narrative template to the next level. Rather than a conversion from lamb to lion, his portrayal of Zorro allowed him to play both parts in parallel. In some scenes he is the meek and passive Don Diego Vega and in other scenes he is the robust and dynamic Zorro. This adds another level of amusement for the audience in that they are in on the secret that Don Diego and Zorro are one and the same.

THE MARK OF ZORRO is significant in that it serves as an important progenitor for not one but two types of action-adventure films. One is the “swashbuckler,” which Fairbanks is generally acknowledged to have established as a reliable box office draw. It was a form that he was to largely stick to for the remainder of his career, playing pirates, musketeers, and even Robin Hood. But also, THE MARK OF ZORRO provides a template for the superhero movie. In particular, the parallels with Batman are hard to miss – an aristocrat using his idle playboy life as a secret identity to conceal his exploits as a mysterious costumed hero, with a secret entrance to his mansion, and a manservant who is the only one who knows his secret. Along with the fact that this film also prompted theaters to expand their bookings in anticipation of repeat business at the box office, these factors single out this remarkable picture as a momentous milestone in the American cinema.

Would Fairbanks have guessed that a century hence superhero films would form the cornerstone of media empires, and that theatrical runs for those films would be measured in weeks, and sometimes months, rather than days? I like to think that he would have.