One century ago this week, the October 16, 1920 edition of “Motion Picture News” carried the following announcement: 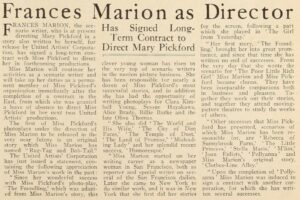 The news that a woman was about to become the primary director of the films of one of the top stars in the industry was actually not as startling as it may sound. A hundred years later we are accustomed to thinking of Hollywood as a boys’ club that is only now beginning to acknowledge the talents of female filmmakers and give them their due. With so much still remaining to be accomplished on that score here in the 21st century, we might be forgiven for assuming that this contract that was being offered to Frances Marion must have been a revolutionary breakthrough in 1920, with the ink barely dry on the Nineteenth Amendment guaranteeing for the first time women’s right to vote.

In fact, that’s not the case. The truth is that the early years of the movie industry in the United States saw considerable opportunities for women. They were as well represented, and generally as well paid, among the ranks of editors and screenwriters as their male counterparts. It’s true that women were not as well represented in the director’s chair as men, but Lois Weber was a successful director, as was Alice Guy-Blache. Indeed, both Weber and Guy-Blache had their own production company, as did Gene Gauntier. And renowned actress Lillian Gish had just recently taken up the director’s megaphone and stepped behind the camera to direct her sister Dorothy in REMODELING HER HUSBAND (1920), writing the scenario herself under a pseudonym and hiring Dorothy Parker to write the title cards, thus comprising an all-female creative team, apart from the cast. 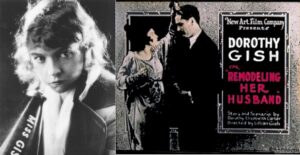 All things considered, then, it wasn’t such a scoop that Mary Pickford had chosen a woman to direct her pictures going forward. Pickford and Marion were fast friends, and Marion had already written the scripts for a number of highly successful Pickford releases. This must have seemed like the inevitable next step in their professional relationship.

And yet it was not to be.

Marion did write and direct Pickford’s next release, THE LOVE LIGHT (1921), but it was to be the only time she would direct her friend and collaborator. We can identify at least two reasons for this, one of a business nature and one of a personal nature.

From an industry perspective, the rising tide that had lifted the fortunes of women in the burgeoning motion picture industry was about to undergo a sea change. In its earliest days, women had been regarded as a welcome addition to the industry. Among other things, they lent an aura of respectability to a medium that was initially seen as rather seedy and ignominious, a low entertainment for the lower classes. Like the schoolmarm bringing a civilizing influence to the wild and woolly old west, women’s contributions to “the flickers” could be seen as a moderating influence on this rough and rowdy young medium, thus providing a sorely needed boost to its public image. Besides, it was easy enough to conceptualize certain moviemaking tasks as “women’s work” — scriptwriting as the equivalent of telling bedtime stories to the children, and editing, the stitching together of the shots, as the equivalent of sewing a garment.

But all of this was before anyone had quite realized just how lucrative this business would ultimately become. By the beginning of the 1920s the sums of money that stood to be made and the sums of money being risked on each venture had become staggeringly vast. This upstart industry was rapidly becoming the world’s biggest floating crap game. Moreover, the largest studios were beginning to up the ante still further by purchasing theaters in order to “vertically integrate” their companies. In order to maintain some financial stability, it had become necessary to invite investment bankers into the game. There had been some tentative steps in that direction in the past, but by late 1919 and early 1920, Wall Street was all in. 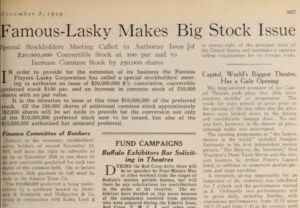 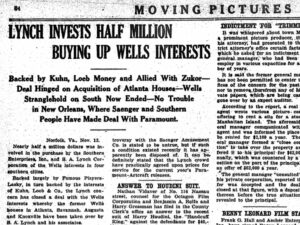 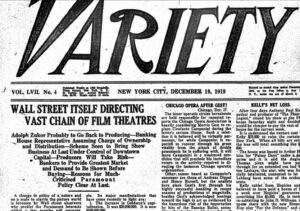 By January of 1920, Adolph Zukor of Famous Players-Lasky felt the need to make a public statement to head off the impression that the pervasive influence of Wall Street money had essentially taken control of his company away from him: 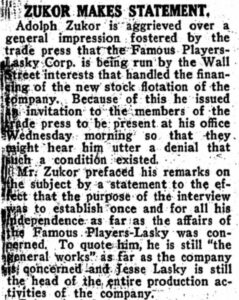 Once the financial stakes had grown to the point where the authority of the titular head of a major studio could be plausibly called into question, it became inevitable, given the prevailing gender stereotypes of the era, that the bankers would conclude that the future fortunes of a pot of gold of that sheer size could no longer be entrusted to women. Each of the prominent women mentioned above — Guy-Blache, Gauntier, Gish, and Marion — saw their careers behind the camera decline during the 1920s. Gish remained a successful actress, but never directed again.

The second reason for Marion’s announced contract as Pickford’s director stalling out after THE LOVE LIGHT was that Marion, by her own account, just didn’t care for directing. She directed once more after that picture, a film called JUST AROUND THE CORNER (1921) for William Randolph Hearst’s Cosmopolitan Productions, then decided that she had no further interest in the director’s chair. Gish, by all accounts, came to the same conclusion after directing REMODELING HER HUSBAND. It is actually not that uncommon for a person who clearly has the creative chops to direct a film to learn the hard way that they simply do not have the requisite temperament. A Hollywood director needs the interpersonal skills of a camp counselor, the organizational skills of an office manager, the decisiveness of an umpire, the stamina of a marathon runner, the composure under pressure of a bomb squad technician, and the temerity of a burglar. Not to mention a high tolerance for chaos. It’s just not for everyone, regardless of gender.

It seems, then, that the creative partnership so confidently announced a century ago this week was doubly doomed. Even if the power brokers had not begun marginalizing women’s authority in the industry, the likelihood is that Marion would have pulled back from directing in any case.

I should point out that the advent of investment bankers’ money did not entirely banish women from holding positions of authority in the industry. There was still the occasional female director such as Dorothy Arzner or Ida Lupino, and much later the occasional executive such as Dawn Steel at Columbia. But it is only now, a century later, that a meaningful and comprehensive re-acknowledgment of the contributions of women in the industry is beginning to take hold. Perhaps this time it will endure.