One century ago this week, in the April 24, 1920 edition of “Motion Picture News,” a notice appeared announcing the forthcoming release of THE SAPHEAD. In retrospect, this film is notable as the feature film debut of silent comedy star Buster Keaton, but at the time the bigger news was that William H. Crane would be reprising his stage role as Wall Street titan Nicholas Van Alstyne. 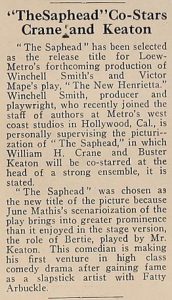 THE SAPHEAD was based on a stage play that by 1920 was already a venerable chestnut with multiple revivals and revisions. The original 1887 play was called THE HENRIETTA. 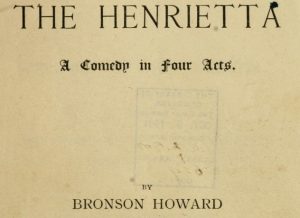 It featured Crane as “Old Nick” and Stuart Robson as his wastrel son, Bertie, the indolent poster boy for the idle rich. While the elder Van Alstyne is an acknowledged lion of Wall Street, his son Bertie is, in sharp contrast, considered such a lightweight that he has earned the nickname “Bertie the lamb.” The broad arc of the story involved the tepid and unambitious Bertie eventually proving himself worthy by acting to rescue the family fortune from a disastrous stock market manipulation. (The “Henrietta” referred to in the title was the name of a mining company, although in the original play there was also a woman named Henrietta and a racehorse named Henrietta, which led to a cascade of misunderstandings that fueled the farcical plot.)

Crane and Robson had been a successful comedy team for many years, a sort of 19th century Martin and Lewis, until a falling out broke up the partnership. 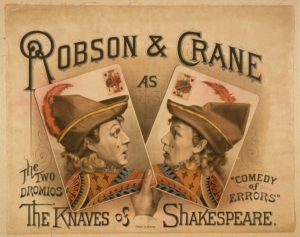 THE HENRIETTA had been one of their most popular stage vehicles, written especially for them by Bronson Howard. When Crane desired to revive the play in 1913, it was recognized that the script would require significant updating to avoid seeming altogether too old fashioned for audiences of the new century. Without unduly altering the broad strokes of the story, the dialogue was given a modernizing revision by Winchell Smith and Victor Mapes, and was retitled as THE NEW HENRIETTA. 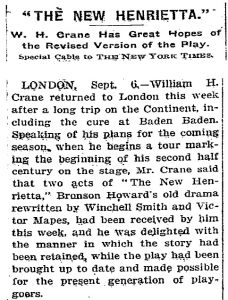 There was no question of Crane and Robson reuniting for the revival, as Robson had passed away ten years earlier. In his place, the role of Bertie went to an energetic young actor named Douglas Fairbanks.

THE NEW HENRIETTA was well received – so much so that when Fairbanks left the boards of Broadway to take his talents to Hollywood his first film appearance was a reimagining for the screen of his “Bertie the lamb” role called THE LAMB. 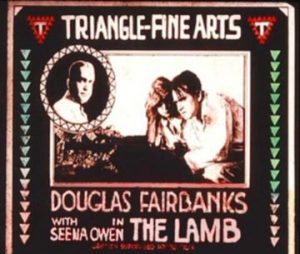 The bare bones plot of a meek and ineffectual young man proving his worth was retained, but the setting had been moved out west, and the action substantially revised to allow for the kinds of physical stunts for which Fairbanks the emerging movie star would soon be renowned. It would be more accurate to say that this film was inspired by THE NEW HENRIETTA than to call it an adaptation of the play.

By the time another movie version, one more faithful to the original play, was conceived, there was no question of Fairbanks reverting to his Broadway incarnation to play it. His brand as an action-oriented movie persona was by that time too well established. Indeed, he was about to make a decisive career move by taking the basic formula of a meek young man, a disappointment to his father, who ultimately brings credit to his family, and morphing it into a kind of early superhero film in his landmark production of THE MARK OF ZORRO. For the upcoming movie adaptation of THE NEW HENRIETTA, which was to be called THE SAPHEAD, a new actor would have to be cast to play Bertie opposite Crane as the father. The assignment went to Buster Keaton.

By this time, Keaton was an established presence in silent comedy. He had been a successful child performer in vaudeville as an integral part of his parents’ act, “The Three Keatons.” When his parents retired the act, he found his way into the movie business as a protégé of comedy star Roscoe Arbuckle. When Arbuckle graduated to feature films, his production company was turned over to Keaton, a solid supporting player who would soon successfully transition into starring roles in two-reel slapstick short subjects.

THE SAPHEAD, however, was Keaton’s feature length debut. Note that the article announcing THE SAPHEAD says that “this comedian is making his first venture in high class comedy drama after gaining fame as a slapstick artist.” Looking back at the silent era, it’s easy to get the impression that all comedies of the period were slapsticks. In fact, there were plenty of comedies of manners, swiftian satires, etc. being produced alongside the baggy-pants hijinks from Mack Sennett and Hal Roach. By and large, the true slapstick comedies were confined to short subjects of one or two reels; the level of unreality that they required just didn’t seem sustainable over a feature length running time. So when a slapstick star made the transition from short subjects to features, it was a career milestone.

Production of the SAPHEAD proceeded successfully, but the release did run into a snag on the business side, when the family of Stuart Robson, who originated the role of Bertie on the stage, asserted ownership of the rights to the play and claimed that they had not given permission for the movie adaptation. 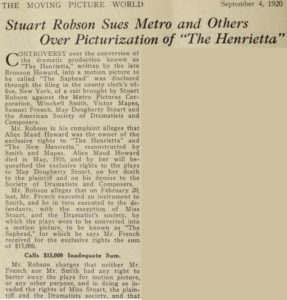 The legal wrangling dragged on for about a year before a settlement with the Robson family was finally reached in October of 1921. 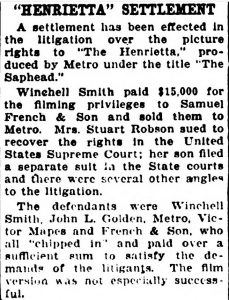 This was a pure acting job for Keaton, as he had no input into the writing or direction of the film. He could have chosen to continue to pursue that path, given that reviews of THE SAPHEAD had uniformly singled out his performance for praise, but he chose instead to go back to making two-reel slapstick short subjects, where he could enjoy creative control and give free reign to his genius for designing sight gags. The result was 19 exceptional short subjects over the next three years, in which Keaton crafted the screen persona that would earn him a permanent place in the comedy pantheon alongside Charlie Chaplin’s tramp and Harold Lloyd’s charismatic go-getter.

Some Keaton fans decline to even count THE SAPHEAD as a “Keaton film” because his creative input was minimal, but it should be noted that the character of Bertie the lamb clearly influenced much of Keaton’s mature work during the latter part of the silent period. Eventually, Keaton followed the lead of Chaplin by moving from comedy shorts into feature length comedies. In making that transition, it was clear that substantive stories would be required. For a one or two reel comedy the plot, such as it was, need only be rudimentary – essentially a narrative clothesline on which to hang a series of gags. But to sustain audience interest for an hour or more, a real plot was needed, and a leading character who could engage and maintain the sympathies of an audience.

In coming up with such characters for his feature length comedies, Keaton would return time and again to a storyline about an ineffectual underdog who is called upon by circumstance to find within himself dormant strengths and virtues by which to prove himself worthy after all. Variations on this character would subsequently turn up in COLLEGE, STEAMBOAT BILL JR., BATTLING BUTLER, and, in his clearest and most direct reincarnation of Bertie the lamb, the hapless rich boy Rollo Treadway in THE NAVIGATOR. Although THE SAPHEAD lacks the creative touch that elevated Keaton’s own films to the exalted status of world-class cinema, it seems clear that its central character conceit left on Keaton an indelible impression that would inform some of his finest mature work.