One century ago this week, the May 15, 1920 edition of “Exhibitors Herald” included a favorable review of THE TOLL GATE, the most recent release featuring western star William S. Hart. This was a significant milestone in Hart’s career, as it marked his debut as an independent producer. 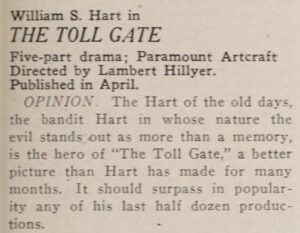 Hart had begun his acting career as a stage performer, touring with Shakespeare companies and, in 1899, playing the role of Messala in the original stage production of BEN-HUR. Among the theatrical acquaintances with whom he struck up a friendship was a young actor named Thomas Ince, who had had some success in juvenile roles.

Ince would go on to become one of the most successful producers in the early days of the emerging Hollywood film industry. In fact, he pioneered the system of regimented assembly line moviemaking that would evolve into the studio system of the 1930s. In 1914 Ince brought Hart to California to make two reel westerns for him. Hart had seen a few of the early western films made in Hollywood and had generally found them disappointing. Born in 1870, he was old enough to remember a bit about the old west, and knew that the Hollywood version bore little resemblance to the real thing. Although he had never actually been a cowboy, Hart had spent part of his childhood in the Midwest. Growing up in the Dakota territory near a Sioux reservation, he came to know Sioux children as playmates, and learned to converse in the Sioux language. In his film work for Ince, he was determined to present a view of the old west that was more authentic.

In this, Hart differed sharply from other early western stars such as Broncho Billy Anderson, who preceded him in western films, and Tom Mix, who was his contemporary. Both Anderson and Mix were much more in the show-biz cowboy mold popularized by Buffalo Bill Cody’s “Wild West Show,” especially Mix, who favored flashy outfits and outlandish stunts. Hart, in contrast, had cultivated friendships with such authentic western figures as Bat Masterson and Wyatt Earp. Here he is with Masterson: 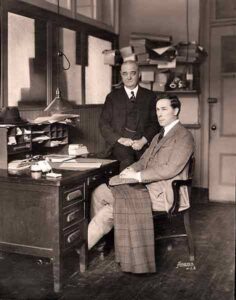 And in fact, he knew Wyatt Earp well enough to correct the record when a 1922 article in the Los Angeles Times made the mistake of printing the legend instead of the facts in chronicling the exploits of Earp and other notorious westerners. The paper’s correction acknowledges Hart’s personal relationship with Earp in deferring to his emendations: 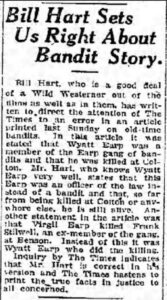 Hart also became a close friend of Charles Russell, whose paintings are renowned for their authentic depictions of cowboy and Native American experiences in the old west. Russell’s portrait of Hart in full cowboy regalia was among Hart’s most prized possessions. Russell’s personal inscription to Hart can be seen in the bottom left corner: 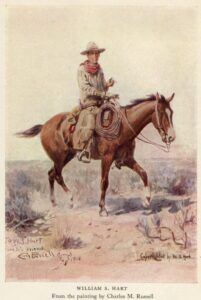 Hart’s early two-reel westerns for Ince met with only moderate success, but his first feature length western, THE BARGAIN, was a big box office hit. From that point on, there was a new western star in the Hollywood firmament, and a different depiction of the old west on movie screens. Hart’s characterizations in his westerns tended to the melodramatic and sentimental, but the settings and wardrobe were consistently authentic – all the more so because Hart usually went beyond just acting in the films to contribute to the writing and direction.

Eventually Hart and Ince came to a parting of the ways, with Hart moving on to a contract with Adolph Zukor at Famous Players-Lasky. Zukor had built Famous Players-Lasky, which would ultimately become Paramount Pictures, into an industry powerhouse. Producing for Zukor would afford Hart bigger budgets and a more prominent showcase for his films. Better yet, Zukor chose to release Hart’s films under the company’s “Artcraft” imprint, a status reserved for such high profile stars as Mary Pickford and Douglas Fairbanks. As a result, Hart’s stature in the industry reached even greater heights. He continued to enjoy considerable creative freedom in his work, but not complete autonomy. He realized, of course, that his contract with Zukor meant that he was not entirely his own master, but he did not seem to chafe unduly under that yoke.

But some of the other leading stars in the industry did, and they were on the verge of doing something about it. Early in 1919, Mary Pickford approached Hart about her plans to establish a new company, run by the performing artists themselves, to be called United Artists. Her partners would be Douglas Fairbanks, Charlie Chaplin, and director D.W. Griffith. She wanted Hart to agree to become the fifth partner in the venture.

At first Hart did agree to join United Artists, but soon after he got cold feet and backed out of the deal. The partners would be putting up their own money to establish and run the new entity, and Hart was loath to do so. He was not as dissatisfied with working for a studio boss, as the constraints under which he labored had thus far seemed a light burden to bear in exchange for the security it offered. He was content to let Zukor continue to finance the films and deal with the task of promoting them. And as a conclusive inducement, Zukor offered Hart a deal he couldn’t refuse — $200,000 per picture and his own independent production company within the Famous Players-Lasky organization. The May 8, 1920 edition of “Moving Picture World” touted the above-mentioned production, THE TOLL GATE, as the first release since Hart “began making his own productions, with his own company and under his own supervision.” 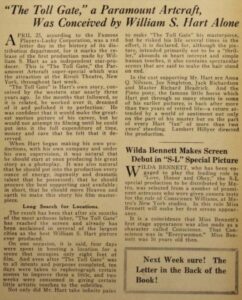 The wily Zukor had given Hart the trappings of what he would have had with United Artists – independence and creative freedom – without the burden of risking his own money. After weeks of rumors, “Moving Picture World” carried the official announcement of Hart’s withdrawal from United Artists in its March 1, 1919 edition. 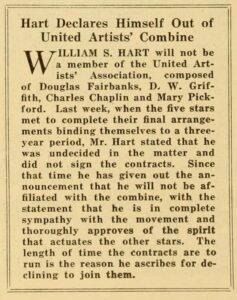 Hart’s honeymoon with Famous Players-Lasky/Paramount lasted until 1924, at which time he was informed that exhibitors had been complaining that his films were “old fashioned,” and that if he wanted to continue his contract he would have to give up his independence as a producer and be relegated to just acting in pictures produced by others. He elected not to continue with the company on those terms, and considered hanging up his spurs and retiring from moviemaking altogether.

He did, however, return to the screen once more in 1925, with what is considered by many to be his magnum opus – an epic western called TUMBLEWEEDS. Its centerpiece is an impressive portrayal of the 1893 Oklahoma land rush that followed the opening of the Cherokee Strip to settlers. Knowing that this was likely to be his farewell to the screen, Hart was determined to make it a memorable swan song. The land rush has been dramatized in films a number of times since, from CIMARRON to FAR AND AWAY, but none has surpassed TUMBLEWEEDS for scope and excitement.

There is perhaps a mild irony in the fact that TUMBLEWEEDS was released through United Artists, the company Hart had flirted with but ultimately spurned. With his final work he had become, for the one and only time, a truly independent producer, and United Artists was the company with an infrastructure in place to bring an independently produced product to the marketplace. The brief association with UA ended on a sour note, however. The film earned only moderate box office returns, and Hart was convinced that this was due in part to UA mishandling the distribution and promotion. He filed a lawsuit claiming that UA had not lived up to their contractual obligations, and after a lengthy process of appeals finally won a judgment against the company. He eventually collected $278,209 from the judgment, but the case was not settled until 1939. The Los Angeles Times reported the verdict in November of that year. 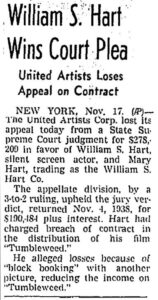 One footnote to the TUMBLEWEEDS saga remains, however. After the transition from silent films to talkies, some of the notable pictures from the silent era were re-released with synchronized music scores, and sometimes even the addition of sound effects. When TUMBLEWEEDS was re-released in this fashion in 1939 by Astor Pictures, a talkie prologue was filmed with Hart addressing the camera to introduce the film. It was the only time that the silent star spoke from the screen.

To fans who remembered Hart as a western action hero, it may have been a bit jarring to hear him speak, because he instinctively reverted back to the intonations of the 19th century Shakespearian stage actor that he had been before becoming a movie star. The introduction consists of Hart describing the Oklahoma land rush and reminiscing about his experiences making western movies, but it is declaimed in the style of a Victorian peroration. It was, he knew, his final farewell to his audience, and he made the most of it. As it was his last word on his own career, it is only fitting that I allow it to be the last word here as well: