One century ago this week, the March 6, 1920 edition of “Exhibitors Herald” carried a notice that Famous Players-Lasky would be mounting a production of DR. JEKYLL AND MR. HYDE featuring matinee idol John Barrymore in the title role(s). 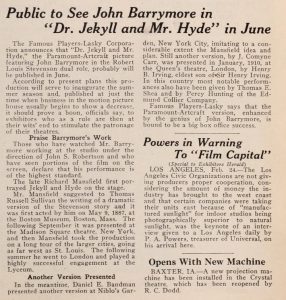 This was by no means the first time that Robert Louis Stevenson’s classic story had been adapted for the screen. The year 1908 had seen not one but two movie adaptations of the novella, one released by Selig Polyscope and featuring Hobart Bosworth, and the other released by Kalem and featuring Frank Oakes. Both of these were one-reel short subjects timing out at around 10 minutes running time, so of necessity the narrative was rendered in bare-bones fashion.

The next significant version was produced by Thanhouser, and featured James Cruze. It too was a one-reeler. There is some dispute about whether Cruze played both Jekyll and Hyde, or only Jekyll. The countenance of the actor who portrays Hyde is buried under quite a lot of makeup, so it is difficult to say for sure whether it actually is Cruze. Fortunately, this version has survived, so you can judge for yourself:

A somewhat longer and more elaborate version was released in 1913 by Carl Laemmle’s Independent Moving Pictures Company (IMP), featuring King Baggot. There is no doubt that Baggot performed both parts, as the main title card plainly says so: “…With King Baggot in a dual role.” Significantly, Laemmle’s IMP would eventually become Universal Pictures, which would score a huge success in the 1930s and 40s by releasing a series of memorable horror movies, beginning with the Boris Karloff version of FRANKENSTEIN (1931) and the Bela Lugosi version of DRACULA (1931). This 1913 Jekyll and Hyde release may therefore be regarded as a kind of prototype for the Universal horror cycle that was to come. This version also survives, although the quality of extant prints makes for difficult viewing:

The year 1920 saw two competing Jekyll and Hyde adaptations – the first-class Famous Players production with Barrymore and a low-rent production from the smaller Pioneer studio featuring Sheldon Lewis. The Pioneer version seemed to be trying to have it both ways by retaining the Jekyll and Hyde title but altering the particulars of the story significantly, presumably out of fear of a Famous Players lawsuit. The result is an unfortunate muddle.

The Barrymore version, by contrast, was a well-produced rendering of the story. Barrymore notably was able to perform the initial transformation into Hyde without facial makeup or visual effects, relying instead on facial contortions. A dissolve to a set of grotesquely elongated prosthetic fingers completes the illusion. It was only after the transformation was complete that Hyde makeup was added to alter his countenance. Here is the scene in question:

There was, by the way, a third adaptation of the story released internationally in this same year. A German production called DER JANUSKOPF was released by Decla-Bioskop. It was directed by F.W. Murnau, who would direct NOSFERATU, the first screen adaptation of Bram Stoker’s DRACULA, just two years later, and featured Conrad Veidt as the main character. As would be the case with NOSFERATU, DER JANUSKOPF altered the character names and significant story elements because the rights to adapt the story had not been secured. This film is, sadly, lost. Only a few stills remain.

The flurry of film adaptations released in 1920 were not by any means the last screen incarnations of Stevenson’s immortal story. In succeeding years a half-dozen big screen adaptations would be released. If you count variations on the story like SON OF DR. JEKYLL and DR. JEKYLL AND SISTER HYDE, the number rises into the dozens. And if you add in made for television versions and parodies and short films, the quantity approaches a hundred titles. And that’s without accounting for broader variations on the theme such as werewolf films.

With so many cinematic adaptations of this one story, it is worth asking what makes it so compelling that filmmakers continue to return to it time after time. The answer, in my view, has to do with Freud’s concept of “the uncanny.” Although “uncanny” is the standard English translation, it is, I think, more profitable to consider the word that Freud actually used: “unheimlich.” The term results from applying a negating prefix to the word “heimlich,” which means familiar and comfortable. We can see in the beginning of the word a cognate of the English word “home,” which can also be seen in the word “heimat,” meaning “homeland.” The “heimlich,” then, is that with which we feel at home. “Unheimlich,” therefore, refers to the opposite — those things that make us uncomfortable, uneasy, disturbed.

But “heimlich” also has a second meaning, referring to concealment. A heimlich act is one performed in secret. Freud points out that the reconciliation of these two meanings in the term “unheimlich” as he uses it is to be found in philosopher Friedrich Wilhelm Joseph Schelling’s remark that the uncanny consists of that which ought to have remained hidden and secret, and yet came to light. It is not difficult to see why Freud pounced on Schelling’s phrasing. One of the cornerstones of Freud’s psychoanalytic theory, after all, is repression.

The sense of the uncanny, then, occurs, according to Freud, when that which is familiar, but repressed, is brought to light, causing uneasiness and, ultimately, fear. This is distinct from something overtly horrific, like a hulking and ferocious monster, which would inspire fear in anyone. The uncanny inspires fear in the individual for whom it is most familiar. And what is more familiar, more heimlich, than our own likeness?

This is the wellspring of dread that DR. JEKYLL AND MR. HYDE taps into. The trope of a sinister double, also known by the German expression “Doppelgänger” (“double walker”) is one of the most enduring staples of the horror genre. There are many reasons for this, I’m sure, but I think one of the most important relates to the fact that horror films almost always are concerned, in one way or another, with the concept of The Other. Whether radioactive monsters or the walking dead or devils or poltergeists or alien invaders, the malefactors that populate these cinematic nightmares are fundamentally other than us. It is their other-ness that raises our hackles, leaving us profoundly disturbed.

But there is a way to press our sense of dread to still another level. What if the Other, without in any way compromising its other-ness, is to be found in the mirror? What is more disturbing than a heimlich Other? One of the strengths of fantasy is that it can concretize abstractions. In Kansas, Dorothy Gale can call Miss Gulch a “wicked old witch,” but it is only a figure of speech. But in the fantasy land of Oz, the unpleasant Miss Gulch can actually be one. In his Nobel Prize acceptance speech, William Faulkner said that the only thing worth writing about is the human heart in conflict with itself. It is only in the fantasy trope known as the Doppelgänger that Faulkner’s formula can be fully reified.

If all you want is to make the cinematic equivalent of a roller coaster ride, then a movie about lizard men from the swamp will do. But if you want to make something more substantial, one way is to deal with the ancient lizard brain that lives within all of us, tucked up under the neocortex that we are so proud of. Take that lizard brain, incarnate it through the idiom of fantasy, and make it the antagonist in a way that reminds us that it issues from within ourselves, and you’ve got a cinematic nightmare that will continue to haunt the viewer long after the lights come up and the empty popcorn box is discarded.

By the time “Exhibitors Herald” carried its notice announcing the upcoming Barrymore version of DR. JEKYLL AND MR. HYDE, the screen had already discovered and exploited its fascination for viewers more than once. That fascination has not dimmed in the century that has passed since then, nor do I expect it to do so in the century to come.