One century ago this week, the August 23, 1919 edition of “Moving Picture World” reported on a strike called by Actors’ Equity, the collective bargaining organization representing stage actors.

The strike dealt a serious blow to management in the “legitimate” theater, but had little or no effect on motion picture production. Movie actors at the time had no collective bargaining representative. Actors’ Equity had made a few overtures in that direction, but had been rebuffed each time. Some movie actors didn’t see the need for a union, and others, mindful of how stage actors tended to disdain movie acting as déclassé, were wary of anything that might appear to relegate them to the status of mere blue collar laborers.

But as Hollywood’s emerging studio system became increasingly regimented and top-down authoritarian, early good-faith efforts to keep the labor force happy began to give way to exploitation in the name of maximizing profit margins. The first segment of the industry’s labor force to push back in a forceful and organized way was the truly blue collar contingent – the carpenters, electricians, painters, and other craft trades.  Confronted with a solid phalanx of all these essential workers threatening to walk off the job simultaneously, the producers signed a Studio Basic Agreement with them in late November of 1926, as reported in the December 1 edition of “Variety”:

Knowing that Equity would take this opportunity to redouble their efforts to unionize the actors (and that other creative personnel might also be tempted to unionize), the industry sought to head off such a move by creating an organization within the industry where grievances could be addressed without the necessity for the nakedly adversarial context of union negotiations. This new organization was called the Academy of Motion Picture Arts and Sciences. And in addition to managing internecine issues of industry policy they decided, what the hell, let’s give out some awards once a year. But the primary purpose, make no mistake, was to forestall talk of further unionization.

For a while it worked well enough. Naturally, Equity saw the gambit for what it was, and said so, but still they were unable to make any headway in Hollywood. The Academy was generally able to strike a sufficient balance between intervening here and there on behalf of the creative labor force and deferring to the overall policy goals of management interests. It wasn’t the same as true collective bargaining, to be sure. After all, the Academy’s interventions on behalf of actors (and others) were on a case by case basis, and a favorable decision for one individual did nothing to set a broader precedent. Still, it was just enough to prompt the work force to continue to resist the blandishments of Equity’s organizers.

The tipping point came with the economic pressures exerted by the Great Depression of the early 1930s. With cash flow dramatically reduced, the studios began to pressure employees, including actors, to accept voluntary pay cuts. This did not go down well at all, especially when it was learned that the studio executives had no intention of similarly reducing their own salaries.

Moreover, national politics had come into play.  On March 6, 1933, FDR called for a temporary cessation of all banking transactions. This “bank holiday” was seized upon by the Hollywood studios as the impetus for drastic action. Draconian 50% wage cuts were implemented – initially across the board, but later modified to a sliding scale so that the lowest earners would not be financially gutted.

Then, in June of 1933, Congress, at the behest of FDR, passed the National Industrial Recovery Act. Title I of this law provided for a relaxation of enforcement of antitrust laws. The idea seemed to be that with the nation’s economic house on fire it was no time to be leaning on major industries with heavy-handed regulations across the board. Instead, industries were encouraged to submit to the president a “code of fair competition” tailored to their particular business. If approved, such codes would supersede normal antitrust enforcement. 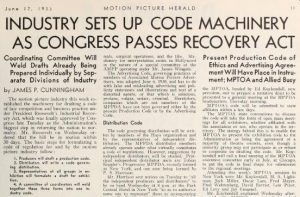 As “Motion Picture Herald” announced in its June 17, 1933 edition, Hollywood immediately set in motion a process for drafting its own code. This kicked off a process of jockeying for influence and advantage throughout the industry. It also proved to be the crucible in which the Academy’s usefulness as an advocate for actors (and other creative personnel) would be put to the ultimate test.

It was a test that the Academy would fail, inevitably. Though the Academy initially made a show of mild defiance, in the end it knew where its allegiance lay. It was an industry creation, beholden to the Motion Picture Producers and Distributors of America, the industry’s public face, and its chairman, Will Hays. This notice from the July 4, 1933 edition of “Variety” puts it succinctly:

Actors’ agents, seeing the writing on the wall, had been urging their clients to unionize since March, and it looked as if Equity might finally gain the foothold in Hollywood that it had been seeking for years. This seemed especially likely since the advent of talking pictures at the end of the 1920s had precipitated an influx of stage-trained actors into Hollywood, many of whom were already Equity members. The March 28, 1933 edition of “Variety” carried the story:

But instead, the movie actors opted to create their own organization, independent of the Academy and independent of Equity. It would be called the Screen Actors’ Guild. The July 25, 1933 edition of “Variety” carried the story: 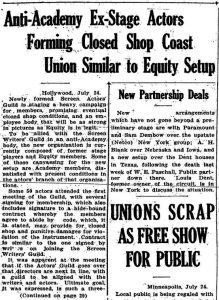 The writers had already formed their own organization, called the Screen Writers’ Guild (now known simply as the Writers’ Guild), and other creative personnel would soon follow suit. As for the Academy, it was profoundly rocked by this exodus, which amounted to a massive vote of no confidence. As the “Film Daily” reported in its October 4, 1933 edition, the Academy very nearly did not survive: 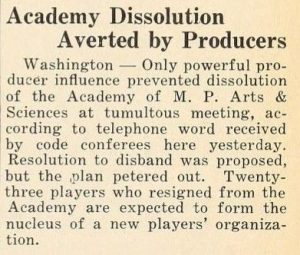 Today the Screen Actors’ Guild, having merged with the American Federation of Television and Radio Artists to form SAG-AFTRA, represents around 160,000 performers. Actors’ Equity, for its part, continues to represent over 51,000 stage performers. The Academy of Motion Picture Arts and Sciences, having escaped its 1933 brush with oblivion, now sponsors grants for filmmakers and film scholars and maintains the Margaret Herrick Library, a significant resource for researching the history of motion pictures in the United States. Oh, and once a year they are pleased to present one of the most turgid and overproduced orgies of self-congratulatory pomp and ostentation that the medium of television has ever seen.