One century ago this week the July 26, 1919 edition of “Exhibitors Herald” reported that the recently-minted Realart Pictures had announced a slate of stars to be featured in its releases. 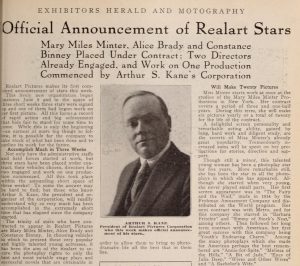 What the article does not mention is that Realart was in fact a subsidiary of Famous Players-Lasky-Paramount. The precedent for this had been set back in 1916, when budding superstar Mary Pickford’s contract with Famous Players came up for renewal.

Adolph Zukor at Famous Players had been leveraging the popularity of Pickford in a clever way. By packaging her films with other releases that commanded less market demand, and by declining to offer her films for individual bookings separate from the packages, he was able to use audience demand for Pickford releases to prop up the bookings of films with lesser commercial appeal. But at a certain point Pickford became aware of the fact that her star appeal was lending support to weaker product in the Famous Players catalog, and that her films might well earn more if not saddled with this burden. Bristling at this exploitation, she demanded greater compensation as a condition of signing a new contract.

Although Zukor recognized that Pickford releases could be earning more, he couldn’t substantially raise the booking rates under the terms of the existing Famous Players contracts. So, as a way of both appeasing Pickford’s demands and increasing the company’s revenue from her films, he opted to create a subsidiary company for the dedicated purpose of handling Pickford releases. He called the new company Artcraft. As a new business entity, Artcraft would not be subject to the contract terms that bound the parent company’s releases through Paramount.  This was, it should be noted, a bit of a mercantile three card monte. Artcraft represented itself as an independent company, and indeed some exhibitors who did not care for Famous Players-Lasky’s business practices actually booked Artcraft pictures in the mistaken belief that they were taking their business to a competitor. The notion that the Artcraft imprint should have released the subsidiary from the terms of any contracts entered into by its parent company is, at best, debatable. Still, the gambit worked.

With Pickford out of the Famous Players-Lasky fold (at least putatively) Zukor knew that the tent-pole effect of tying lesser releases to Pickford product would be lost, but in any case the company would soon be experimenting with a new policy (later abandoned) of releasing titles individually rather than packaging (“block booking”) them. With the enhanced revenues that Pickford’s films would bring in under the Artcraft banner, he was able to give Pickford a substantial pay increase and also to create for her a dedicated production unit over which she could exercise a measure of creative control.

By 1919, however, Pickford had moved on to become one of the founding members of United Artists, along with Douglas Fairbanks, Charles Chaplin, and D.W. Griffith.  Other marquee names had since been moved under the Artcraft banner (including Fairbanks, for a time), but the luster of the Artcraft name had unquestionably faded. Rather than trying to shore up the brand name, Zukor opted to create a new one featuring a new slate of star performers, calling it “Realart.” Like Artcraft before it, Realart operated as a kind of sham independent company. With enough digging one could ascertain that it was a subsidiary of FP-L, but Zukor was not about to allow this to become common knowledge.

The Realart experiment was to be short-lived. The performers attached to Realart, while popular, did not have the megawatt star power of a Pickford or a Fairbanks. By December of 1921, the decision was made to absorb Realart back into the parent company so that future productions would be released under the FP-L imprint. To the public, this could be portrayed as a merger or corporate takeover, although in fact it was just a consolidation within the family.

But the ghost of Realart would come back to haunt Zukor. A year later, in December of 1922, the competing firm Vitagraph would sue FP-L, charging restraint of trade: 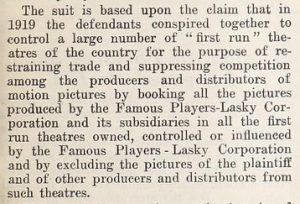 And among the bill of particulars is this charge: 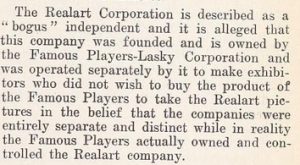 Which was, of course, substantially accurate.

But it gets worse. Zukor’s business practices had also drawn the attention of the Federal Trade Commission. The May 12, 1923 edition of “Exhibitors Herald” reported on the second week of the commission’s hearings: 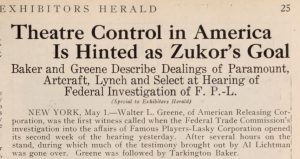 The commission’s investigation into this matter would ultimately drag on through several rounds of hearings over a period of several years. When its ruling was finally handed down in July of 1927, the news for Zukor would not be good. By this time, FP-L had long since absorbed Paramount, its distributor, and the company as a whole was renamed as “Paramount Pictures.” Paramount had abandoned its brief flirtation with a truly open booking policy and had returned to block booking, the selling of packages of films in a block rather than allowing individual films to stand or fall in the marketplace on their own merit. It was this practice that the FTC had primarily targeted in its ruling, but the employment of subsidiary companies like Artcraft and Realart in a deceptive manner had also figured prominently in the hearings leading up to the ruling. In its July 16, 1927 edition, “Exhibitors Herald” reported on both the commission’s ruling and Zukor’s defiance: 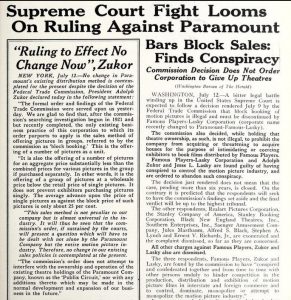 Eventually the U.S. Department of Justice would get involved, and the case against Paramount would lurch its way slowly and with many legal detours and blind alleys to the U.S. Supreme Court. The case of United States v. Paramount et al. would not be decided until the late 1940s, but when it finally was resolved it would fundamentally alter the motion picture industry’s way of doing business, and would help to set the stage for a new generation of filmmakers who would never have been allowed in the studio gates under the old studio system.