One century ago this week, the February 21, 1920 edition of “Moving Picture World” highlighted a spirited endorsement of the west coast as a venue for shooting motion pictures from producer Thomas H. Ince, by way of his director of publicity, Hunt Stromberg.

One might think it hardly necessary to make such a case. The independent producers who had migrated west from the New York / New Jersey area may have been initially motivated by a desire to get as far away as possible from the strong-arm tactics of Thomas Edison and his Motion Picture Patents Company, but they quickly learned that Southern California had much more to offer than a mere refuge from harassment. The weather was exceptionally good, and any type of location a movie maker might desire could be found close at hand — sea coast, desert, mountains (including snow country in the highest mountains), forests, prairie, you name it. The burgeoning movie industry quickly and firmly took root in Los Angeles and its environs, and soon the word “Hollywood” had become synonymous with the American film industry.

And yet, a century ago there did appear to be a movement afoot for some of the top studios to migrate back east to the New York area where it had all begun. After all, at that time Los Angeles could hardly compete with New York as a cultural center. With Broadway plays, major museums and art galleries, a world-class public library, and an incomparable music culture ranging from the New York Philharmonic to the bohemian street buskers of Greenwich Village, the lure of the Big Apple for creative people was undeniable. But perhaps even more important was the status of New York City as a financial center.

“Motion Picture News,” in its August 23, 1919 edition, had grandly announced that the “era of big business” had arrived for this growing industry: 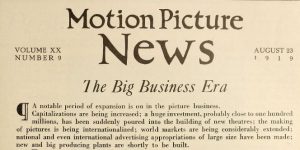 That meant, among other things, that capital investment would be a central concern going forward. This was true not only because of the rapidly escalating cost of producing the films, but also because Adolph Zukor’s recent expansion into theater ownership had kicked off a kind of theater acquisition arms race among the top studios. Zukor had made Famous Players-Lasky-Paramount the first movie company to become vertically integrated, encompassing production of the product, distribution, and retail (theatrical exhibition) of the product under one corporate roof. With the crossing of this Rubicon, his rivals realized that a bright-line distinction had been drawn. Henceforth, the price of a seat at the major players’ table would be vertical integration, which meant buying up theaters — an extremely costly enterprise. Only Wall Street money could reliably fund that level of investment. The October 24, 1919 edition of “Variety” duly reported the inevitable result:

And so it came to pass that the rugged individualists who had built Hollywood studios into profitable ventures relying on little more than their own sweat, savvy, and chutzpah, now found themselves accepting Wall Street investment money, and, of course, its inevitable corollary — loss of autonomy. In its December 26, 1919 edition, “Variety” editorialized about what this influx of capital might mean for the industry: 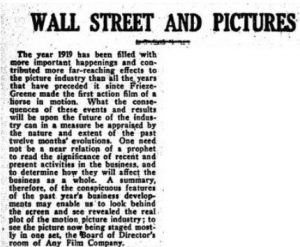 But for good or ill, Wall Street and Hollywood were now partners, and so it made more sense than ever for studios to maintain production facilities in or near New York City. During 1919, Goldwyn had moved east: 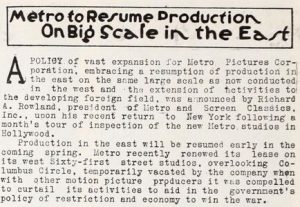 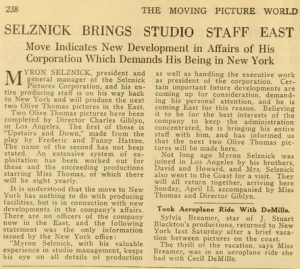 Selznick, indeed, had given the following quote to “Moving Picture World” for its April 26, 1919 edition: “All this stuff about California being the only place to make moving pictures is bunk.” This appeared under the headline “California Gets Another Rude Blow.” 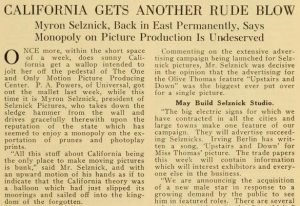 William Fox, in a significant show of commitment to New York production, constructed a massive Manhattan facility, covering a city block on Tenth Avenue, from 55th to 56th Streets. The enormous three-story structure was designed to include not only production stages, but also administrative offices and the laboratory for processing the film. In its own way, it was meant to be as much a self-contained “city” as Thomas Ince’s “Inceville” and Carl Laemmle’s “Universal City.” The production complex was so impressive that the June 21, 1919 edition of “Scientific American” devoted an article to it, including this diagram: 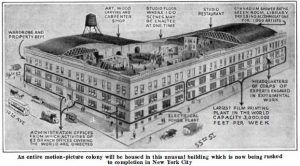 It was never seriously contemplated by any of these studios that Southern California would be entirely forsaken as a production facility site in favor of a wholesale move back to the east coast, but it did seem for a while as if major studio movie production might become a truly bi-coastal enterprise.

In the long run, however, maintaining major production facilities on both coasts proved unsustainable. Although New York was never entirely abandoned as a production site, slowly but surely Hollywood, California reclaimed its undisputed title as the epicenter of movie production in the United States.

There is, however, a footnote. Although New York did not long maintain its status as a co-equal production hub, it did maintain its industry primacy in an equally important respect. Production operations may have gradually migrated back to the west coast, but the business offices stayed behind in New York, which was, after all, where the money tree bloomed.

During the golden age of the Hollywood studio system, the Los Angeles production facilities were run by domineering, autocratic figures such as Louis B. Mayer, Harry Cohn, and Darryl Zanuck. Their names were as well known to the movie going public as those of the stars who worked for them, and they basked in the reflected glamor of those matinee idols. They seemed, to the fan magazine reading public, to be monarchs of all they surveyed. But each of these studio heads was, in fact, answerable to a company president. This was the prophecy of that 1919 “Variety” editorial coming home to roost. When you take their money, you surrender your autonomy. Company presidents such as Nicholas Schenck at MGM and Barney Balaban at Paramount, whose names were not known to the public, had the power to veto any decision made by the studio’s Los Angeles based head of production, and in fact had the power to fire them. Indeed, in 1951 Schenck actually did fire Mayer.

As the movie industry moved into its golden age of the 1930s and 40s, it was Hollywood’s west coast that retained the glamorous title of “movie capital” of the country. But it was New York, the wellspring of the really important kind of capital, that retained the reins of power.