One century ago this week, the April 12, 1919 issue of “Motion Picture News” carried the following item:

It had become common by this time for large production companies to build their own studio facilities. Thomas Ince had built “Inceville” and Carl Laemmle had built “Universal City,” for example. Nor was it unheard of for top tier stars to build a studio all for themselves. Charlie Chaplin had done so a little over a year ago at the corner of La Brea and Sunset. But it also made sense for there to be utility properties, designed for movie production but not owned by any one production entity. Such a facility could rent out its production stages and office spaces to companies that could not afford, or simply did not care to bother with, constructing and maintaining their own facility. That’s the service that “Hollywood Studios, Inc.” was built to provide.

The architect behind the construction of this new facility was John Jasper, who had designed the Chaplin studio, and had initially managed it as well. Recently laid off from the Chaplin company in an organizational restructuring, Jasper put his talent and experience to work in this new venture.

The facility did a brisk business, as may be seen in this summary from 1920, in which the trade paper “Camera!” (“The Digest of the Motion Picture Industry”) shows productions in progress there featuring Bessie Love, one of the top stars of the period, and others helmed by Marshall Neilan, one of the industry’s most respected directors.

Another clipping from “Camera!,” this one from 1922, lists several productions underway at the facility, a snapshot of a thriving operation:

And by 1923, comedy star Harold Lloyd, having recently left Hal Roach to go independent as his meteoric career thrusts him into the very top rank of Hollywood box office draws, has begun shooting his films there:

In 1925, Jasper sold his ownership stake in the property and moved on, but the facility itself continued to thrive.  The new proprietors, comedy producers Al and Charles Christie, rechristened the property as “Hollywood Metropolitan Studios.”

Over the coming decades the property would change hands multiple times and operate under multiple different names. It has been known at various times as “Hollywood General Studios,” “Hollywood Studio Center,” “Metropolitan Sound Studio,” and “General Services Studio.” Howard Hughes shot there, as did Mae West, Bing Crosby, Fred Astaire, and James Cagney, among many others. In addition to motion picture productions, numerous television shows also made use of the lot. The pilot episode of “I Love Lucy” was shot there, as were many episodes of “Ozzie and Harriet,” “The Lone Ranger,” and “The Addams Family,” along with a host of other popular programs.

One of the most interesting episodes in the history of this venerable property is its purchase, in 1980, by Francis Ford Coppola. The ambitious Coppola was looking for a home for his Zoetrope company, which he hoped to fashion into a salutary combination of an old-style Hollywood studio and the kind of nurturing environment for hip young talent that had been developed at BBS by Bert Schneider, Bob Rafelson, and Steve Blauner. It was an admirable goal, but Zoetrope, sadly, seemed perennially cursed with ill-fated inaugural projects. In its original incarnation, Zoetrope had been sunk by the poor reception of George Lucas’s film TXH-1138. This new, studio-based Zoetrope would likewise be brought to grief by Coppola’s own first effort there, ONE FROM THE HEART. Beset by red ink, Coppola was soon compelled to sell the facility to yet another owner. But during Zoetrope’s brief tenure there, Coppola retained the “Hollywood General Studios” name on the company letterhead: 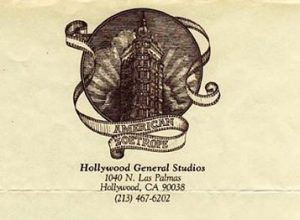 Both of the production spaces designed by John Jasper are still standing and still in use a century later. The Chaplin studio is now owned by the Jim Henson Company and the facility that began its life as Hollywood Studios, Inc. is now the Las Palmas facility of Sunset Studios, who proudly celebrate its long and storied history on their web site: 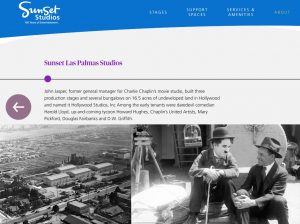 Although his name is by no means as well known as the industry’s stars and directors, or even as well known as top tier exhibitors like Sid Grauman or Samuel “Roxy” Rothafel, John Jasper’s contribution to Hollywood was substantial and the monuments he left behind have endured longer than many of the entertainments produced there.