In the industry trade papers one century ago this week there was considerable buzz about the spacious and ornate new theater opened by Sid Grauman at 307 S. Broadway in Los Angeles, across the street from the famed Bradbury Building. The March 2, 1918 issue of “Motion Picture News” featured an entire section dedicated to coverage of the extraordinary showplace. 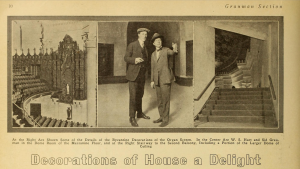 Movie exhibition had come a long way in a very short time. When moving pictures graduated from being just an adjunct to a more comprehensive show (incorporated into a vaudeville bill or a magic show for example) the first commercial ventures dedicated entirely to projecting movies for a paying audience hardly merited the name “theaters.” Indeed, they did not initially go by that name. These cramped and seedy venues were called “nickelodeons,” because admission cost five cents.

Nickelodeons targeted the lower classes, including economically disadvantaged immigrant populations, who found in them entertainment that was not only affordable, but also accessible. These were, after all, silent films, heavily dependent on pantomime,  and therefore easily followed even by those whose command of English was limited. Conversely, moving pictures were generally shunned by the upper classes as a cheap and common diversion for the great unwashed.

When this perception gradually began to change, it was only natural for the quality of the cinema showplaces to undergo a commensurate improvement. Large and ornate movie theaters date back as far as 1913, when Thomas Lamb opened the Regent Theater in New York, followed by the Strand Theater on Broadway. But Sid Grauman’s “Million Dollar Theater” was the first such showplace in Los Angeles, which was by that time firmly established as the epicenter of the movie-making industry.

By this time, these large venues were commonly referred to as “movie palaces,” an apt description for these massive and elaborate structures that sometimes took up an entire city block. Here’s how Grauman’s structure looked from the outside, from an artist’s rendering in the Los Angeles Times January 1, 1918 edition: 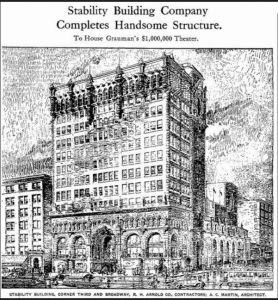 Inside, the auditorium boasted 2,345 seats: 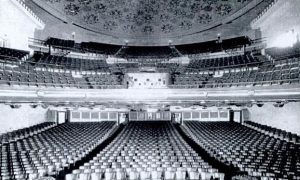 But there was more to this theater than mere size. The place was an architectural marvel both aesthetically and structurally. Designed in a florid Spanish baroque architectural style known as Churrigueresque, much of the detailing incorporated imagery from John Ruskin’s Victorian fantasy THE KING OF THE GOLDEN RIVER, a sort of 19th Century Harry Potter story. 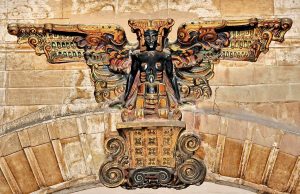 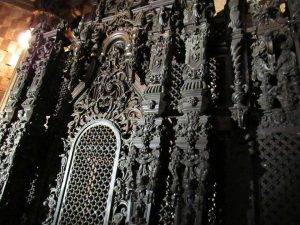 The massive 945-seat balcony posed a particular structural problem in that one of the consequences of fighting World War I had been a shortage of structural steel. In place of the usual steel supports, architect A.C. Martin designed a concrete girder, something that had never before been attempted on this scale. City engineers were skeptical, but gave their approval when the girder successfully withstood a test load of 1.5 million pounds.

Sid Grauman would go on to build other renowned theaters, including his Egyptian theater and, of course, the Chinese theater, where he hit upon one of the most inspired promotional gimmicks in the annals of show business — asking movie stars to leave their footprints in wet cement in the forecourt of the theater.

Movie palaces continued to flourish throughout the 1920s, culminating in Samuel Rothafel’s magnificent Roxy Theater in New York. Known, with some justification, as the “cathedral of the motion picture,” the Roxy’s auditorium seated just over 6000. A 110-piece orchestra was employed to provide music, along with not one, not two, but three elaborate theater organs. To accommodate stage productions the building included several floors of dressing rooms and spacious rehearsal areas. Ushers were uniformed and were regularly drilled with military precision in the efficient discharge of their duties. They were aided by sensors in the seats that were connected to a seating chart so that ushers could see at a glance which seats were occupied and which were available. There was even an infirmary on the premises, staffed by nurses and a physician in case a patron were to be taken ill while attending a show.

Movie palaces such as Grauman’s theaters and the Roxy were selling more than just admission to a film screening. They were selling an experience — an evening’s entertainment spent in the lap of almost unimaginable luxury. For the price of a movie ticket one could spend a golden evening living like a plutocrat, enveloped in sybaritic splendor and pampered like royalty. The heyday of the motion picture palace carried showmanship to stratospheric heights, further solidifying the movie business as one of the country’s most lucrative industries.

It couldn’t last, of course. After World War II, movie palaces began to decline. Some, like Grauman’s Million Dollar Theater, survived by becoming an events venue and/or by being acquired by deep-pocketed arts organizations. Others, like the Roxy, were demolished. When the Roxy was torn down in 1960, “Life” Magazine poignantly captured the event by photographing Gloria Swanson, whose 1927 picture THE LOVES OF SONYA had been the theater’s premiere offering, standing amid the rubble: 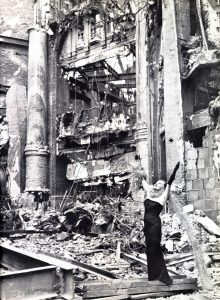 The image seemed to encapsulate the passing of the old Hollywood, as the studio system fractured and the industry struggled to find a new business model and a new way of producing and marketing its product. A new Hollywood was on the horizon, one in which a coterie of hungry and talented young filmmakers would revitalize American cinema with fresh and exciting pictures. But they would make their mark largely without the benefit of glamorous movie palaces in which to reach their audiences. Those days were, to coin a phrase, gone with the wind.