One century ago this week, the April 19, 1919 edition of “Exhibitors Herald” contained the following item:

It was not a front page story, just a modest report tucked inside. And yet it represented the last chapter in the story of a company that until recently had towered over the emerging movie industry in the United States like a colossus, and had imposed its will on that fledgling business broadly, uncompromisingly, and none too gently.

The General Film Company’s origin lies with the efforts of Thomas Edison to exert total control over the emergence of a marketplace for the newly invented moving pictures. Edison owned some of the relevant patents, but not all. After some initial squabbling among his company and other patent holders, Edison proposed that they instead band together and put all the patents into a common pool. That way they could effectively freeze out everyone else. The new company was called, appropriately enough, the Motion Picture Patents Company. An announcement of the establishment of this new business entity ran in “Moving Picture World” on December 26, 1908: 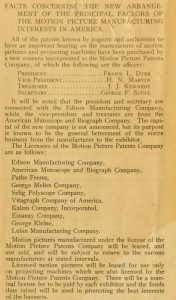 Typically if you own a patent, you want to encourage anyone and everyone to manufacture the item you have patented, because every time they do so they owe you a royalty check. But you are also within your rights to forbid anyone else to manufacture the item, which is what the Patents Company chose to do. Their reasoning was that if no one else was authorized to fabricate moving picture equipment then the Patents Company’s constituent companies would be the only source for the movies. Although this word didn’t exist back then, what we would say is that they chose to make their money from the software (the movies) rather than from the hardware.

Once established, the Patents Company wasted no time in setting forth the terms under which exhibitors would be permitted to continue to use the projection equipment on which it held what was now a clear and undisputed patent authority. The language below spells it out: 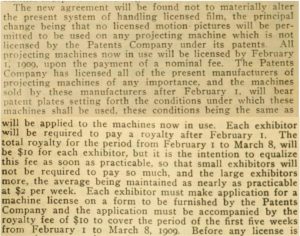 The General Film Company was created in 1910 as a subsidiary of the MPPC to centralize its film distribution and licensing. Most exhibitors acquiesced to the demands of MPPC and General Film, but many chafed under the perceived unfairness of having to pay a weekly licensing fee to operate equipment they owned. A few preferred to take the path of open revolt, and renounced their General Film licenses in favor of operating independently. The feistiest of these was independent distributor Carl Laemmle, who took out defiant ads in the trade papers flouting the authority of General Film. He even invented a cartoon character, whom he called “General Flimco,” to satirize the Patents Company’s restrictive policies: 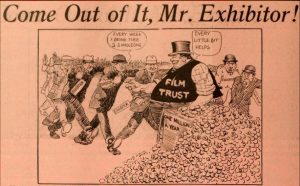 Eventually, Laemmle and other distributors took the logical next step and got into the movie production business, also without the blessing of the Patents Company.  Naturally, the MPPC filed lawsuits. Their patents, after all, were being blatantly violated by these independents. But the courts take time, and meanwhile the independents were flooding the market with product that competed very effectively with the MPPC product. Consequently, the MPPC did what any red-blooded American business would do in a similar situation — they hired gangsters to intervene. In short order, independent production companies found themselves beset by gun thugs breaking up their operation. Usually, the Patents Company goons would shoot up the camera — not because they were compassionate guys, but because they knew that if you shoot the cameraman they will just get another cameraman, but if you shoot holes in the camera you put them out of business, at least until they can fabricate another illegal camera. Here is director Allan Dwan describing such an encounter:

The MPPC’s bullying tactics, both in the courts and on film locations, kept the lid on for a while, but the tide eventually turned against them. The independents soon figured out that they could get away from much of the harassment from gun thugs by moving their operation away from Edison’s New Jersey home base all the way out to the west coast, where they found that Southern California was exceptionally well suited to movie production. Equally importantly, the MPPC began to lose its court battles. This culminated in a 1915 district court ruling which held that the company was an illegal monopoly in violation of the Sherman Antitrust Act. The U.S. Justice Department had filed suit against them in 1912, and this judgment was the result of that proceeding. The New York Times reported the ruling in its October 1, 1915 edition:

The company appealed, but in 1918 their last appeal was denied. This legal defeat undercut the patent-based exclusivity on which their business rested, leaving them to wither on the vine, with their constituent companies largely dispersing to retreat into more conventional forms of competition in a market that suddenly found itself comparatively democratized.

General Film Company, the Patents Company’s administrative subsidiary, deprived of its leverage to dictate terms to distributors and exhibitors, could hardly be expected to survive for long, and indeed it did not. The report cited by “Motion Picture News” above proved accurate, and in due course the industry press reported on the company’s bankruptcy proceedings. The August 9, 1919 edition of “Motion Picture News” carried the story: 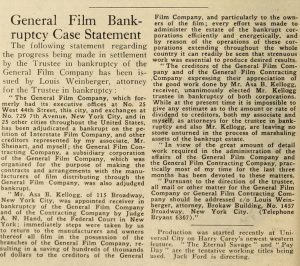 And with that, the reign of the General Film Company quietly ended.

The Motion Picture Patents Company was dead, but the idea of exerting monopolistic power over the motion picture industry did not die with it. The coming years would see a new and even more elaborate system of controlling the production, distribution, and exhibition of motion pictures for the benefit of a small cartel of companies. And ironically, this new monopoly (technically, an oligopoly) would arise from among the ranks of the former “independents” who had successfully challenged the dominance of the Patents Company.