One century ago this week an ad appeared in the industry trade papers announcing the distribution policy of the recently formed United Artists: 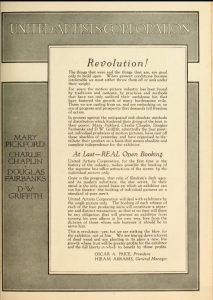 The “open booking” policy referenced in the ad represented a sharp break with the “block booking” policy pioneered by Adolph Zukor at Paramount. The block booking paradigm was designed to leverage the popularity of movie stars to compel exhibitors to book films of lesser commercial value in order to get the highly marketable films in which the top stars were featured. Under this policy, the star vehicles were not available as individual bookings at all. Instead, the exhibitor was required to book those prized titles as part of a package deal, including titles that might not otherwise have received wide rentals if marketed on their own. For the studios it was an effective way of guaranteeing a robust and predictable revenue stream independent of the variability of their products’ individual inherent market value. But this revenue stability was procured at the expense of the exhibitors, who were compelled to accept lesser product and hope that the box office windfalls from the star vehicles would offset the mediocre box office receipts from the lesser films.

United Artists was offering the prospect of relief from that burden by renouncing block booking in favor of open booking.  One reason they could afford to do so was that the company was owned by the biggest of the big stars (Chaplin, Pickford, and Fairbanks), who would be appearing in their own films, thus guaranteeing substantial box office returns, and a big name director (D.W. Griffith) whose name was as potent a box office draw as many movie stars.

This business model, would, however, pose challenges for the fledgling company. By this time, shorter films of one and two reels had largely been supplanted in the marketplace by feature length films over an hour in length and sometimes over two hours. This drove up production costs per picture sharply. Most of the larger studios had followed Zukor’s lead by placing a roster of stars under exclusive contract and then using block booking to leverage those assets, thereby assuring a sufficient cash flow to finance these longer and more elaborate productions. By forgoing this practice, United Artists had to confront the problem of how to finance their productions. With their combined star power, substantial box office returns were virtually guaranteed, but in order to get to that point they first had to produce the films. And that required daunting amounts of up-front working capital.

The partners were reluctant to raise capital by going public with the company, fearing loss of creative control over their pictures. The remaining option was to seek financing from investment bankers. This was a relatively new venture for a movie studio in Hollywood — not unheard-of, but by no means common. Banks were cautious at first — it is not without reason that the movie industry has been called “the world’s biggest floating crap game” — and early loans of this type generally came with stringent collateral security requirements. Eventually, however, loan officers came to realize that the names of Chaplin, Pickford, Fairbanks, or Griffith on a movie marquee represented a solid guarantee of financial returns. This form of financing would prove all the more essential to U.A.’s business model as Fairbanks, in particular, moved into the production of ever more expensive swashbuckling adventure epics like THE MARK OF ZORRO (1920), THE THIEF OF BAGDAD (1924), and THE BLACK PIRATE (1926).

Today major motion picture production would be unthinkable without investment financing. The industry would inevitably have moved that way sooner or later, and indeed had already taken tentative steps in that direction, but it was the megawatt star power of United Artists a century ago that really got the ball rolling.