One century ago this week, the June 7, 1919 edition of “Moving Picture World” carried the following announcement: 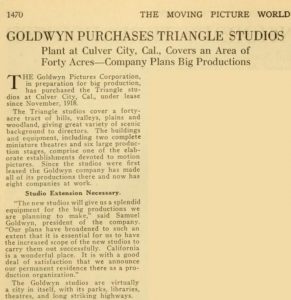 The Culver City property in question had been the primary base of operations for Thomas H. Ince and his Triangle partners since 1916, the successor to Ince’s groundbreaking “Inceville” facility near Santa Monica. Triangle had seemed to be a promising venture, bringing under one roof the considerable talents of Ince, comedy producer Mack Sennett, and director D.W. Griffith. The partnership, however, did not last long. By early 1918 Griffith, Sennett, and Ince had all jumped ship to take their talents elsewhere.

As Triangle was failing on the west coast, Samuel Goldfish’s east coast operation, a movie studio in Fort Lee, New Jersey, was causing him more and more headaches. For one thing, transporting personnel from New York City to the Fort Lee studio entailed a slow ferry ride, cutting into precious shooting time. For another, wartime fuel shortfalls and a limited electrical grid wreaked havoc with production schedules. By 1918, Goldfish could no longer resist the lure of Southern California, and decided to move the production operation of his Goldwyn Pictures Corporation to Hollywood, leasing the former Triangle lot at Culver City, which he would later purchase outright, as noted above.

Goldfish had formed Goldwyn Pictures in partnership with Broadway producers Edgar and Archibald Selwyn. The company name was a portmanteau of the two surnames (“Gold-wyn” being preferable to “Sel-fish” for obvious reasons.) As the Goldwyn name gained some currency in the business, Goldfish would occasionally receive correspondence addressed to “Samuel Goldwyn.” He saw in this an opportunity. The name “Goldfish” had been serviceable enough when he was in the glove business, but show business was was too heavily populated with high-verbal wiseacre wits for such an obvious joke opportunity to be passed up. Soon after arriving in Hollywood, Goldfish had his surname legally changed to “Goldwyn.” (In any case, it’s not as if “Goldfish” were his actual birth name. He was born in Poland as Schmuel Gelbfisz, and had the “Goldfish” moniker hung on him at Ellis Island.)

The newly rechristened Samuel Goldwyn was now established at the Southern California epicenter of motion picture production, but others had preceded him, and in one important respect he was constrained to play catch-up. Increasingly, the coin of the realm in this emerging industry was star power. To run with the big dogs, it was necessary to have a roster of established stars under contract. But the canny Goldwyn thought there might be a way to make up for the lack of star performers. His idea was to engage the services of well-known authors to provide story material. Like the stars, these were artists with proven track records in the marketplace — creators whose by-lines were bankable brand names. Why not use their names in the studio’s publicity instead of relying entirely on the popularity of actors? 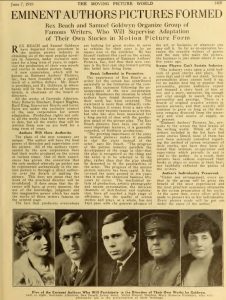 The seven writers whose names were initially attached to the venture were Rex Beach, Gertrude Atherton, Mary Roberts Rinehart, Rupert Hughes, Basil King, Gouverneur Morris, and Leroy Scott. These were all best-selling fiction writers of their time, as well known in the early twentieth century as James Patterson, Janet Evanovich, or Stephen King today. It seemed like a good idea at the time, and indeed in the wake of this business move Goldwyn was able to secure, largely through the good offices of Broadway wheeler-dealer Frank Joseph “Joe” Godsol, a partnership with theatrical producers Lee Shubert and A.H. Woods. The immediate result of this deal was a massive infusion of working capital, as noted in this headline from “Moving Picture World” on August 9, 1919: 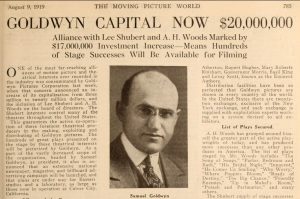 But the eminent authors program ultimately did not prove successful. The ostensible idea was for these authors to have creative control over the movie adaptations of their stories, but in practice that’s not the way it generally worked. There was considerable resentment among the studio’s creative personnel toward these Eastern writers. Goldwyn may have held the eminent authors in high esteem, but many among his staff regarded them as cultural carpetbaggers. The authors’ ideas were routinely vetoed by story department head Jack Hawks, who pronounced them not suitable for cinematic storytelling. Indeed, Hawks had a point. What works in a novel will not necessarily work in a screenplay, and in most cases (though not all) these imported scribes had not taken the trouble to learn the difference. At the same time, it is likely that Hawks’s knee-jerk resentment occasionally led him to reject out of hand a fresh idea that would have improved a script.

In any case, with creative personnel continually at loggerheads it was unlikely that very much work of real merit would come out of the collaboration. By and large, the eminent authors emerged from their Hollywood sojourn well paid but creatively frustrated. Elmer Rice, in his autobiography MINORITY REPORT, recalls sitting next to Gertrude Atherton at a screening of a film adapted from one of her novels. When he asked her what she thought of the film, she replied, “What I like most about it is that there is still a picture to be made out of my book.” With a handful of notable exceptions, including Gouverneur Morris’s THE PENALTY (1920) and Rupert Hughes’s THE OLD NEST (1921), most of the films resulting from the eminent authors experiment were both critical and popular disappointments.

The poor performance of the eminent authors program was by no means a mortal blow to Goldwyn’s financial interests, but there were clouds on the horizon that were not apparent when he made the optimistic studio acquisition at Culver City in 1919. The industry as a whole experienced an economic downturn around 1921 – 1922.  This slump resulted from a number of factors, ranging from escalating expenses to public relations woes. It seemed that suddenly in order to be a major player it was necessary to own a production company, a distribution company, and a chain of theaters. This trend toward vertical integration among the major studios had led to a frenzy of theater purchases, a kind of corporate “arms race” among the more well-heeled studios.  At the same time, Hollywood was reeling from a series of rather lurid scandals that had dealt a blow to the industry’s public image. The budgetary strains from the theater acquisitions combined with the box office losses resulting from public disapproval due to scandalous headlines (along with other factors) took a toll on the Goldwyn Pictures Corporation’s bottom line. In early 1922, Sam Goldwyn’s partners held him accountable and acted to remove him as president. “Moving Picture World” noted the change of leadership in its March 25, 1922 edition: 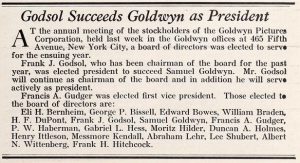 This was not a first for Sam Goldwyn. Some years earlier he had been in business with Jesse Lasky and Adolph Zukor at Famous Players-Lasky, and had been forced out of that company as well. Given this history, it is not surprising that when he began his next venture in the picture business he chose to do it entirely on his own, as an independent producer, without partners. That way, at least no one could boot him out of his own company.

One interesting footnote here is that subsequent to his departure from the Goldwyn company his former partners filed a legal action seeking to enjoin him from using the Goldwyn name in his future ventures. After all, the name had belonged to the company before it belonged to Sam. This legal maneuver did not ultimately succeed; the court ruled that he could continue to use the Goldwyn name professionally as well as personally. The final irony is that when Goldwyn Pictures merged with Metro Pictures in May of 1924 to form Metro-Goldwyn-Mayer, Sam Goldwyn’s surname became an integral part of one of the industry’s most potent powerhouses without his ever having been associated with it. The newly christened M-G-M set up shop at the Goldwyn facility in Culver City, inheriting both Sam’s old studio space and his name, all without his participation. 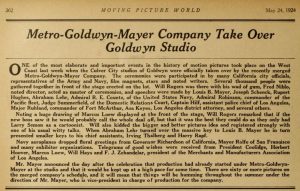 That studio facility would remain the primary base of production operations for M-G-M until 1969, when the studio was sold to millionaire businessman Kirk Kerkorian, who wasted no time in selling off the back lot and cannibalizing the studio’s assets. Today the former Goldwyn lot is the site of the Sony Pictures studio, where regular tours are offered to the public.