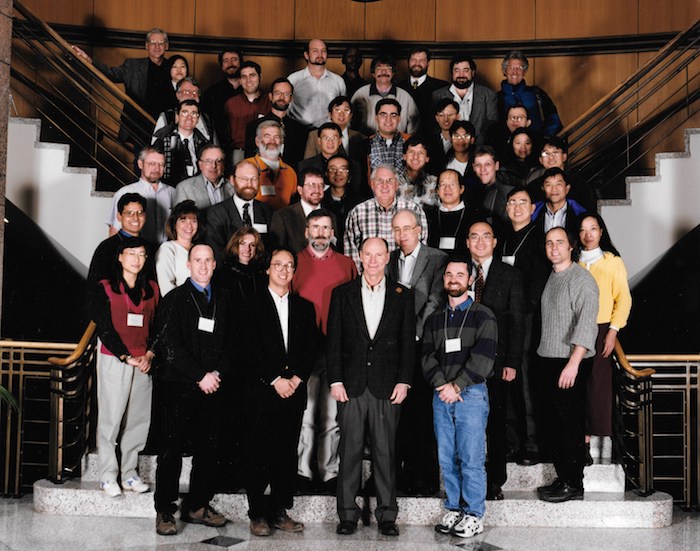 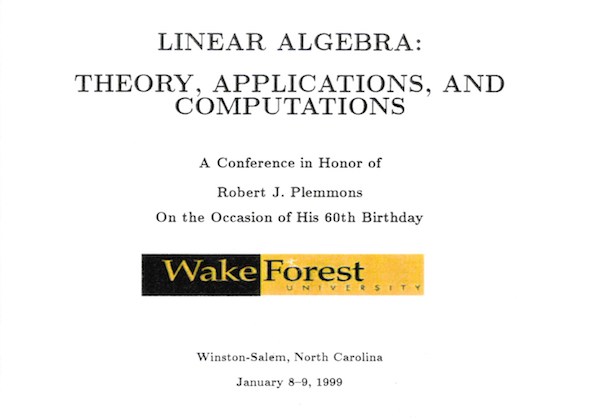 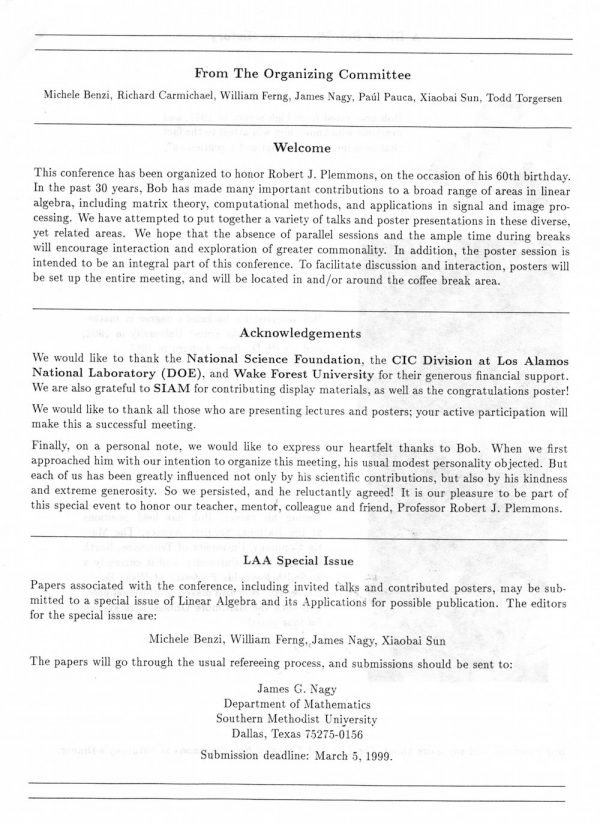 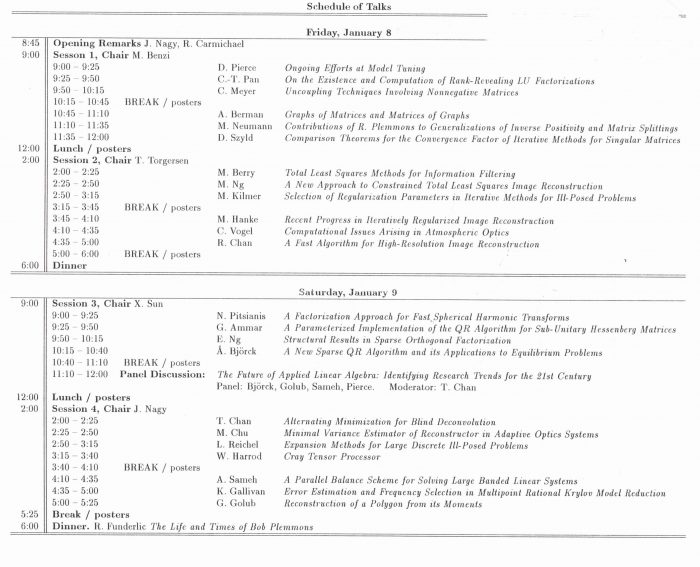 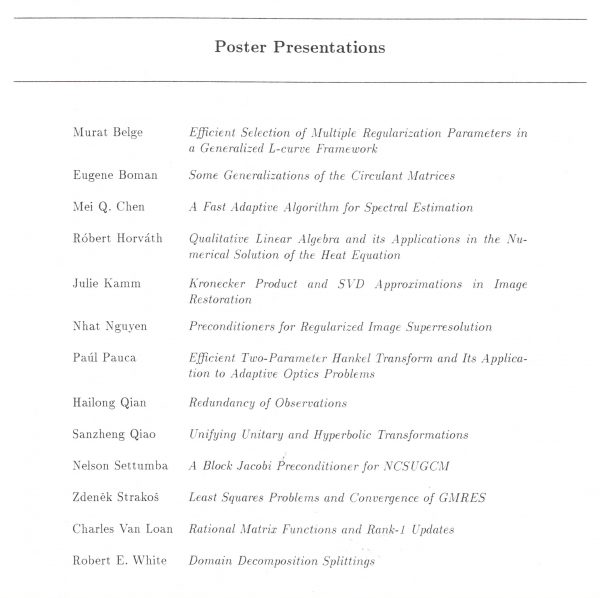 What do the areas of semigroup theory, nonnegative matrix theory, numerical linear algebra and image processing have in common? Perhaps many things. How- ever, if we change the question to who is the most influential person to have made research contributions in each of these areas, the answer would have to be Professor Robert J. Plemmons. In total, Bob has published over 130 papers and 3 books in these diverse areas [1–146]. In January 1999, a conference was held at Wake Forest University to celebrate Bob’s 60th birthday, and to pay tribute to the many substantial contributions he has made to the mathematics community. The papers published in this special issue are dedicated to Bob on the occasion of his 60th birthday.

Bob Plemmons was born on 18 December 1938 in Old Fort, North Carolina. He completed his B.S. degree in mathematics from Wake Forest University in 1962, and his Ph.D. from Auburn in 1965. His Ph.D. thesis advisor was Richard Ball, but he worked mainly with Emilie Haynesworth. He has held nonacademic positions at the National Security Agency and The Martin Company, and academic positions at the University of Tennessee (where he met his numerical linear algebra mentor, Alston Householder) and North Carolina State University. In 1990 he returned “home” to Wake Forest University, as the Z. Smith Reynolds Professor of Mathematics and Computer Science.

Bob began his research in semigroup theory, with his first published paper in 1965 [1]. More generally, his interests in this initial stage of his research career revolved around the study of finite algebraic systems, including finite semigroups, groups, and related graphs. A 1971 paper [11] on Boolean relation matrices and their generalized inverses appears to mark Bob’s first foray into matrix theory. During the 1970s, Bob Plemmons authored or co-authored approximately 30 papers on generalized inverses, nonnegative matrices, and M-matrices. These papers include several distinguished contributions to the numerical analysis of M-matrices; especially noteworthy is a series of papers on iterative methods for singular and rectangular systems of linear equations, generalizing to these situations many key results of Varga’s theory for square, nonsingular systems.

Included in this period is his first (1972) paper with Avi Berman [13], which began a prolific collaboration resulting in a total of nine joint papers and culminated with the publication by Academic Press, in 1979, of the very influential book Nonnegative Matrices in the Mathematical Sciences [40]. One of the most frequently cited books in matrix theory and linear algebra, Nonnegative Matrices was republished by SIAM as a Classic in Applied Mathematics in 1994 [111].

By 1979, Bob began making contributions to the solution of large sparse least squares problems, including applications in geodesy (in collaboration with Gene Go- lub) and structural analysis, and parallel numerical methods. These contributions continued well into the next decade, together with several papers on numerical meth- ods for computing the stationary distribution vector of discrete Markov chains. Addi- tional contributions in this period concern the factorization of matrices with special properties, such as generalized diagonal dominance.

His most recent work has been driven by applications in signal and image pro- cessing. This includes recursive least squares problems and filtering, inverse factor- ization algorithms for linear prediction, adaptive condition estimation, circulant and FFT-based preconditioners for ill-posed Toeplitz and block Toeplitz systems, and, most recently, algorithms and analysis of adaptive optics systems for ground-based telescope imaging.

In addition to his research contributions, Bob has been an active member of the mathematical community, serving as an editor for many journals, organizing confer- ences, and acting as an advocate for funding for the mathematical sciences before Congress and other decision-making bodies.

Anyone who knows Bob Plemmons will agree that he is certainly a unique person with diverse talents. He was a star athlete at Wake Forest University as an under- graduate, and continued to play (professional!) baseball with the Baltimore Orioles farm system while in graduate school at Auburn. He is an avid ocean fisherman and gardener; he has often taken his friends and colleagues on fishing trips to the Gulf Stream, and on tours of his “back yard” garden (if he talks you into eating his peppers, make sure he joins you!). He even used to pilot his own airplane. And though he speaks often, and most proudly, about his family, probably Bob’s best known nonmathematical attribute is his kindness and generosity.

It has been our pleasure to take part in honoring our teacher, colleague and friend.